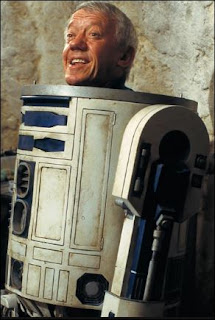 I was sorry to hear of the passing of Kenny Baker over the weekend.

The miniature-sized actor played the part of R2-D2 in the original - and prequel - Star Wars movies. If you've read much of this blog, you'll know that the Star Wars movies are some of my favourites (well, most of them are, but we'll leave that for another day!).

When I found out about Kenny Baker's death, I couldn't help but smile at something that happened back in my school days.

A group of us were on this Star Wars kick when the special editions of the movie were released in cinemas during the spring and summer of 1997. A huge argument, or rather discussion, broke out all about Kenny Baker.

I was adamant that Kenny Baker was inside the droid. A few agreed, but there was some sort of belief back then that the 'Kenny Baker' in the credits was a guy in charge of the remote control.

I don't even remember winning that argument. I'm pretty sure there had been more than one R2-D2 model used for filming and that it was powered remotely, but I can guarantee this - Kenny Baker was not manning the controls!
Posted by David Taylor at 12:00 AM