This year's NFL Draft will kick off shortly after this post is published at 12am BST on Friday morning.

I aim to watch the first part of it then finish it tomorrow morning.

For example, I bought three magazines when I usually buy the one.. 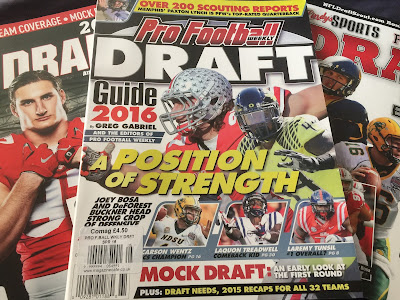 I always enjoy reading American football magazines. I mainly like purchasing the annuals that come out during the summer as I prepare for the upcoming season.

The draft mags are a good way to introduce the new and upcoming players to fans. However, there's something that irks me. It isn't anyone's fault, though.

Whenever there's a trade in the weeks leading up to a draft, a fair amount of the content in these magazines immediately become obsolete.

Still, I'd much rather have a copy (or three!) beside me as I watch the draft to see what the writers think of the players that are selected. It's all part of the fun.
Posted by David Taylor at 12:00 AM