Coming To America: Then And Now

Even though I didn't know the exact date initially, today is one of the days I have been lowkey looking forward to for a while.
That's because the sequel to Coming To America is out.
The film is coming out on Amazon Prime and is a follow-up to the 1988 movie which starred Eddie Murphy as an African prince who travels to New York in order to find a lady to marry.
Along with Murphy was Arsenio Hall, who played Prince Akeem's assistant - Semmi. There are many other famous actors in the film such as James Earl Jones and John Amos. Even Samuel L Jackson and Cuba Gooding, Jr have very minor parts in it. 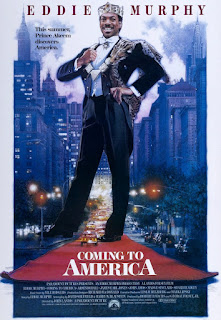 I first watched the movie as a child. Back then, I enjoyed watching movies starring Eddie Murphy. For example, Beverly Hills Cop was a film that I could almost recite word-for-word back then.
And before you start wondering whether I would blurt out the 'get the f**k outta here' line, guess again. I recorded a crappy 'edited for television' version which aired on BBC One on Christmas evening. The BBC edition had Murphy saying 'get the hell outta here'.
Anyway, back to Coming To America - this film became my second-best Murphy film behind Beverly Hills Cop.
As I have grown up, I kind of started to dislike some of Murphy's movies. Especially those that came after The Nutty Professor in 1996. So - even though I am excited to see what Prince Akeem is up to these days - my expectations are set low.
To prepare for today's 'premiere', I rewatched Coming To America. I guess it was the first time I had seen it since somewhere in the 1990's.
It was fun to view it again. There was some parts I had totally forgotten about until they were in front of me on the TV screen.
I took my nephew along for the trip down Memory Lane. It was the first time that he had seen the movie. His closing thoughts went like this - 'I liked it, but it's not the sort of film I would watch again and again'.
A fair statement considering the film came out thirty-three years ago.
Posted by David Taylor at 9:00 AM