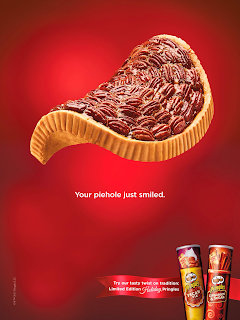 Whilst browsing through the online edition of Sports Illustrated yesterday, I came across an advert promoting 'Holiday Pringles'.

They have two flavours, apparently.

One being Cinnamon & Sugar, that I noted in a post last month. A similar flavour is being sold over here in the UK.

Unfortunately, we won't get to sample that one over here unless they end up being sold in the import American candy shops that seem to be the in-thing these days.

I think the advertisers did a good job making a pecan pie shaped like a Pringle.

I hope nobody got tricked into thinking the potato snack is meant to look like that when they opened up the can.
Posted by David Taylor at 10:59 AM