On November 19th 2010, I wrote about a Christmas Ptingles Hunt I went on after finding out the company that makes the potato snack had launched a Roast Turkey and Pigs in Blankets flavour. The search ended with me finding, and ultimately, purchasing the items.

The other week, I was randomly looking at the aforementioned post and wondered whether the Pigs in Blankets flavour would be released for 2013. The company has a Roast Chicken & Herb flavour out throughout the year so I wasn't banking on a Turkey one coming out on the shelves for Christmas.

With that said, they also have a Smokey Bacon flavour.

I didn't think these flavours would see the light of a Tesco food aisle but I was wrong. 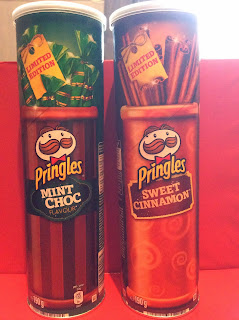 The UK manufacturers have introduced two flavours for the festive season : Mint Choc and Sweet Cinammon.

So, as you would expect - I had to test them out.

I am not that fond of cinnamon flavouring so decided to buy one box of that variety. I pushed the boat out and purchased two of the Mint Choc.

The first flavour I tested was the latter.

If you recall, Walkers brought out a Chilli & Chocolate flavour a number of years ago. Back then, the idea of a crisp with chocolate flavouring sounded intriguing. A crisp tasting of mint and chocolate was even more intriguing, in my opinion.

I am not going to hate on the flavour.

It is a unique idea. I just couldn't get used to it. The best way I could describe it was it was like eating crisps after you have eaten chewing gum.

Or better yet - it's like eating After Eights and Pringles.

At the same time.

The Sweet Cinnamon flavour was the worst Pringles flavour I have ever tasted. I had a few of them but ended up giving them away. I did not like them at all.

To be fair, I have never been fond of cinnamon so my opinion should come with an asterisk  Therefore, the Mint Choc wins the taste test on a technicality.

At the end of the day, whether I like or dislike a flavour should not discourage you from trying these unique editions.

Test them out yourself and see if you prefer Cinnamon over Mint Choc. I believe there will be a larger consensus of people who will.
Posted by David Taylor at 12:00 AM