The Bodyslam Heard Around The World 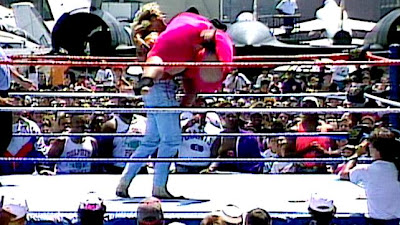 I was sat here yesterday evening wondering what I was going to write about on today's blog post. As I was thinking, I asked myself 'what happened on July 4th ten years ago?' and quite a few memories flooded back (Barry White passing away and Roman Abramovich buying Chelsea FC are two examples). I then pondered what would I remember if I thought back twenty years.

And then I knew what I was going to dedicate today's subject to.

July 4th 1993 was the day that the World Wrestling Federation put everything they had into the heir apparent to Hulk Hogan.

On the day in question, the WWF champion - Yokozuna - was challenging American sports stars to bodyslam him at a WWF special appearance on board the USS Intrepid.

Turn on your kayfabe goggles for the next few paragraphs.

A number of stars from the WWF, NBA, NHL and NFL tried to bodyslam the wrestler who - at that time - was billed over five hundred pounds. All failed apart for one final 'surprise' challenger (who arrived at the last minute via helicopter, nonetheless) Lex Luger.

He managed to lift the Samoan wrestler off his feet instantly turning himself babyface and making him a main eventer for the WWF.

In the weeks that followed, Luger travelled across the USA on a tour bus named 'The Lex Express'. The sole purpose of this campaign was to hype up his title shot at Yokozuna at SummerSlam in August.

Even to this day, I'd argue that this was the hardest the WWF had pushed a guy in such little time. They truly put everything they had into making him the number one star in pro wrestling. If you didn't live through that time, you'll probably think I am exaggerating. Trust me, this was a huge deal back then.

So, after that major marketing push that lasted from that afternoon of July 4th all the way to August 30th the payoff was a WWF title win for Luger, right?

I wasn't as clued into the backstage politics of professional wrestling back then. However, this fourteen year-old, felt the finish was a total waste of time.

I still do twenty years later.

Luger never did get to hold the belt.

The plan beyond SummerSlam was for Luger to win the Royal Rumble and then challenge Yokozuna at WrestleMania X in March of 1994.

On paper, the plan looked good. The problem, however, was that Bret Hart had such a great fan base and by the spring of the following year, Vince McMahon decided that the Hitman was the wrestler that would defeat Yokozuna for the championship at WrestleMania.

I often wonder what would have happened to wrestling had they let Lex Luger win the title at SummerSlam.

The decision not to pull the trigger on him after all that time and effort spent promoting him in the summer of '93 still baffles me even to this day.

Update - After writing this, I remembered that I had written about Lex Luger a number of years ago. Click this link to read it.
Posted by David Taylor at 12:00 AM