I've just heard the news that Kirstie Alley has passed away.
Just like yesterday, I have a quiz show reference to make to start things off.
It was within the last year or so that I found out that Alley had appeared on the American game show - Match Game - as a contestant. This was before she became famous.
Match Game is like what we in Britain call 'Blankety Blank' when panellists have to guess the missing word in a sentence. The contestants' words have to match that of the panellist. 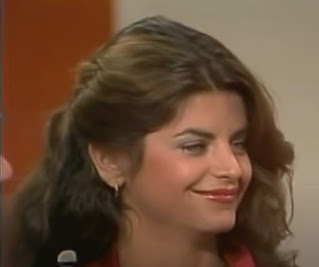 The Match Game appearance is just one of a number of things I recalled about Kirstie Alley's career upon learning of her passing.
I'll obviously remember her most for her work on the TV series - Cheers. However, I surmise the first time I was introduced to her was on Star Trek II: The Wrath of Khan (the one with that ear scene!).
Best of all, as it pertains my favourite Kirstie Alley movies, is Look Who's Talking. I loved that film when I was younger.
Posted by David Taylor at 9:37 AM