Last week, I published a post in which I wrote about being reunited with a Wrigley's Extra chewing gum flavour that has been discontinued here in the UK.

The post ended with me mentioning that my friend had sent over a handful of other chewing gums from the United States of America.

Considering we're a few days removed from Christmas, I thought it would be ideal to try a flavour which - its own way - is festive. 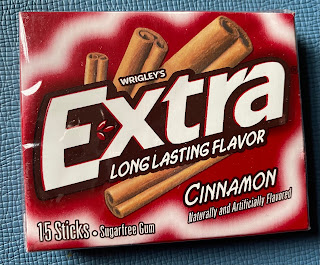 I have a love/hate relationship with cinnamon flavoured foods. I love cinnamon rolls but absolutely hated the Coca-Cola, with a hint of cinnamon, which came out a number of Christmases ago.

And then there's Cinnamon Toast Crunch - a cereal I absolutely despised as a child, but have - on the rare occasions I've been given a bowl as an adult - found I haven't disliked it as much as I once did.

Before I've even opened the packaging, I have been struck by the scent. I know I'm not going to like the taste of this gum.

After tasting it and chewing a great deal, I have to admit that I surprisingly didn't dislike as much as I had feared.

The gum does have a strong cinnamon smell when you first open the box, and especially when you unwrap the stick from its wrapper. However, after popping it in my mouth, I noticed the sensation was not as strong as I expected. That's a good thing.

As funny as this may seem - the flavour stayed longer than I had anticipated as well. I didn't expect it to, but it did.

Cinnamon Extra gum isn't something I would ever go out of my way to have again, but I am grateful to have tried it because I would not have ever considered sampling it otherwise.

There are still a bunch of other gums in a padded envelope waiting to be tried out. Look out for more posts like these in 2023.