Sometime in 2017, and for at most a couple of years after that, I would find myself buying packets of a specific Wrigley's Extra chewing gum.

The flavour of the chewing gum was.. 'Bubblegum'.

To describe the taste, I would say it was like your typical bubble gum albeit in the form of a chewing gum.

Unfortunately, the packets became increasingly hard to find. It eventually became safe to conclude they had been discontinued.

A few months ago, I happened to find a YouTube video of someone shopping in the USA. The lady in the video was checking out shelves of gum and I noticed the pink Extra box that I had been seeking out since they left the UK store shelves at least a couple of years ago.

I showed a friend in the USA the chewing gum in question and she sent me over a few packets (and also other flavours to try out). 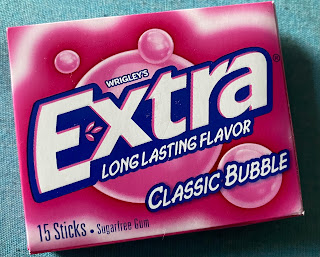 The American Wrigley's Extra bubble gum flavour differs slightly to the one we had over here in the UK in a couple of ways.

First, the flavour is called 'Classic Bubble' whereas ours - as noted above - was simply called 'Bubblegum Flavour'.

The other contrast is in the sticks themselves.

Over here in the UK, the sticks of gum were small and white in a waxy wrapper. Imagine a regular Wrigley's Spearmint Gum in a foil wrapper. Now envision opening the wrapper and seeing a pink stick rather than a white one and that's what an American bubblegum flavour Extra is. 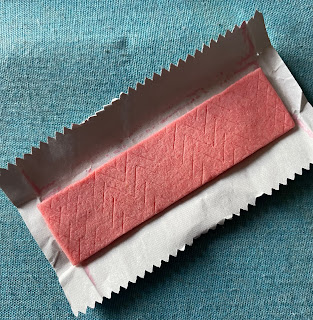 Here's the thing, though - the gum tastes EXACTLY like the one they sold here in the UK.

Oh, and the US box has one extra stick compared to the fourteen pieces we had in our boxes. So, that's another plus.

I plan to try the other chewing gums I was sent over the coming weeks and months. Stick around.