Tomorrow's post is going to be the annual 'Review of the Year' when I take a look at the predictions I made on January 1st and see where I went right or, in most cases: wrong.

This post you're reading today, well, this is a proper review of 2022 but with a twist.

If I had to focus on just a few things that happened to me in 2022, the first is one which really hurt me and that was losing a good friend of mine.

I've written about my sister's dog - Spiky - a lot since he came along in 2018. I found myself having to write about him in March after he passed away.

I've stated it before. He wasn't my pet, but I spent a lot of time looking after him pre-Pandemic. He was the closest thing I had ever had to a pet, so losing him left me sad for a really long time. I still am, to be fair.

Spiky's death made me have a small shot of what actual owners go through when their animals pass away. My little dose was enough.

To look at 2022 in a lighter side, I now technically have two pets of my own. Emphasis on the word 'technically'.

Over the summer, I looked after my nephew's two kittens for what was supposed to be 'a few weeks'. Those few weeks turned into months. And they're still with me right now.  One even walked across the keyboard a few paragraphs back.

Their names are Oreo and Squeak.

Squeak is straight black and Oreo is - as you'll probably guess by his name - black and white. 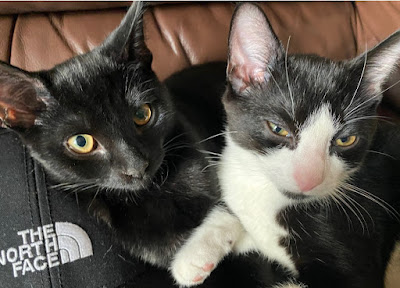 I cannot emphasise this enough - I have never been a pet let alone a cat person, so it has been an adjustment getting used to making sure they're looked after properly.

When they first came here, I would find myself looking up videos on YouTube about cats. One really stood out to me because it was titled something like 'Why people don't like black cats' and it went on about how there is a stigma surrounding black cats being unlucky. I also surmise that it could date back to anxieties about witchcraft because you associate black cats with witches.

After seeing that video, I became paranoid to the point where I questioned where I hadn't shown Squeak as much as attention as Oreo. I had noticed that he would prefer the company of other family members than me and he tended to bite me whenever I would try to play with him.

Well, it turns out that the 'bite' thing is apparently something kittens do to show their love (another thing I learned on YouTube!). I initially thought he didn't like me. So, coupled with the video about black cats having a stigma against them, I consciously made more of an effort with Squeak.

I believe it's safe to conclude that I could now very well be his favourite family member. He is the Houdini of the pair and manages to find himself upstairs jumping at me when I least expect it.

For example, there was one morning he came up and was rolling around on his back and - to be quite frank - he looked like a vampire bat as he was doing so. I'm not helping the aforementioned stigma about black cats, but the following picture of Squeak does make me chuckle. 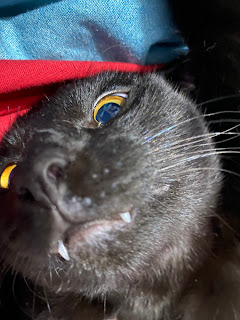 Instead of biting, Oreo tends to lick people. One of the memories I have of watching THE major event of 2022 - Queen Elizabeth II's funeral - will be sitting there as Oreo licked my hand for a few moments.
Wales' trip to the World Cup will be a 2022 memory I'll cherish. Yes, even though it didn't go as well as I would have liked.
One of the takeaways from the tournament will be sitting on the living room sofa during the Wales versus Iran match. Oreo came along during the game and fall asleep on my arm as it rested on the back of the sofa. 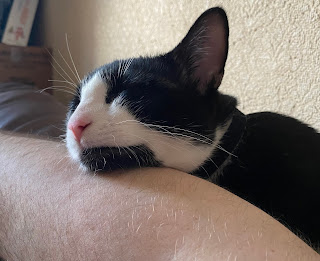 Loss will be the theme of 2022. Especially in a year when we lost people like Queen Elizabeth II and even yesterday's news that Pele has gone. It wasn't just Spiky our family lost this year. My nephew's grandfather and also my uncle passed on in '22.
Where there's loss, there's found. I found that maybe I am a pet person after all..
Posted by David Taylor at 12:00 AM