In September of 2017, my sister's dog was put down after spending over ten years as part of her family. Even though Paddy didn't live with me, and I rarely saw him, it was the first time I had ever felt true despair over the loss of a pet.
I suppose the hurt was mainly due to the fact that Paddy had been a part of my nephews' lives and I don't like seeing them upset.
Months later, their family opted to adopt a dog. This one was a two-year old whose owner had to move into a home.
As I wrote in a post at the end of 2018, I didn't think it was a good idea to adopt. I had no say in the matter , but - from my own opinion at the time - I felt it was best to have a dog from a puppy and then build a bond from the start.
If you read that post from 2018, you'll see that I backtracked on that opinion thanks to one dog.
Spiky first came to visit me on February 4th 2018. I remember finishing off an email to a friend by saying 'it's time to meet my new nephew' as a joke before heading downstairs.
I walked into my living room and there he was. The dachshund-beagle mix (Doxle?) was there sitting on my sofa.
'He doesn't do much, does he?' I noted as I tried to get Spiky's attention by smoothing the top of his head.

I was able to capture his initial aloofness with two pictures. Both had the newcomer staring away from me with no acknowledgment of my existence.
The introduction was short. I walked back upstairs to grab my clothes for a shower.
When I came back into the living room not long afterwards, I was greeted by what felt like an entirely different dog.
Spiky jumped down from the sofa and made this funny walk on his hind legs to greet me back into the room. He continued this two-legged dance-into-a-jump as his front legs balanced against mine for a while until I told him to 'calm down, calm down!' like a Harry Enfield scouser.
That was when I knew I had made a new friend.
The two-legged greeting became a regular thing whenever he was excited to see us or any visitors that arrived to our home. I'd often call him a 'Meerkat' whenever he would do it.
Spiky was a nervous dog to start off. We don't know what his life was like before he came to live with my sister's family, but there were a few things I noticed.
For starters - I would realise that, whenever I would close down the stand on my Microsoft Surface, it would make a noise. He would jump. I had to get used to making sure I closed it gently.
There was a moment when I forgot to close it in the alternative manner and it made a noise. Spiky didn't flinch. That was one of the moments I always think back to whenever I contrast his early days in my company.
He, or rather - we, overcame the initial anxieties.
The first challenge I ever had with Spiky was when my sister and her family went away for a weekend. I was asked to look after him. It was only a few weeks into his new life. He would cry whenever any of his new owners would leave my home for a short period, so - if I am to be straight up - I have to admit I was not looking forward to the challenge of looking after the dog for at least three days straight.
As I predicted, within seconds of their departure, Spiky was at the foot of the door crying for their return. I had shared my concerns about having to care for him with a friend days earlier. She recommended cheese. Well, I think that's what she had suggested for that particular scenario. As soon as I saw him crying, I took some cheese out of the fridge and handed Spiky some. He followed me away from the door and back into the living room.
Mission accomplished. He more or less stayed by my side from that moment on.
A stronger bond between he and I was built over those three days thanks to the cheese, but also with Cheerios.
When we would go for a walk, I'd bring the cheese for him and a handful of Cheerios for me. After the cheese had gone, he'd sniff the Cheerios I had brought with me because I would take him out before breakfast so I shared some with him.
The way he munched them, then wanted more once he was done, confirmed it: Cheerios would be a constant on the shopping list.
With my sister and her partner working during the days, I would often get to look after Spiky for them. Sometimes, if the traffic was bad, I would get a call asking if he could stay overnight. It was easier for them and especially easier for me because it meant I could take him for his walk earlier in the mornings.
I could write a lot more about my adventures, and sometimes - misadventures!, with Spiky a part of my life. Maybe one day I will. For now, I'd like to finish with another contrast to the first impression I had of him.
As I have pointed out above, by way of sharing the photograph, Spiky had an aloof aura when I first met him. The best contrast I have to that picture is one I took almost a year later.
Spiky had stayed overnight. I had taken him out my backyard for a wee before I prepared to take him to the park.
After dressing, I came downstairs to get him ready. 'Where's your sidekick?' I was asked. I didn't know. He wasn't in my room when I was changing. He wasn't in the living room. Nor was he in the dining room.
He was rarely in any of the other rooms in the home. Well, apart from the kitchen when he wanted to eat that is!
'Spiky!?' I yelled each time I entered a room in my home. I even opened the back door to see if I had left him outside. I couldn't have, but I still had to look because that was kind of where I had recalled last seeing him.
I came back up into my bedroom. 'Spiky?' was called once again. And there I saw it. The mountain of a rolled up mess made from my duvet and blankets ruffled. I had my iPad in my hand, I quickly recorded the moment when the head popped out with a 'what's all the fuss about?' look. 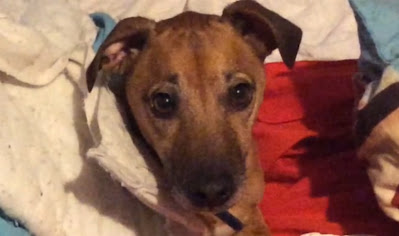 Spiky was such a character and a great companion. There's that saying about dogs being a man's best friend. I wasn't even his owner, yet it feels like I've lost my own pet.
I miss him immensely.
And I already know right now that I always will.
Posted by David Taylor at 12:00 AM