I haven't done a bet builder wager on Monday Night Football for quite a while, so thought I would have a punt on the game between the New Orleans Saints and Baltimore Ravens which will kick off in an hour and fifteen minutes from when this post goes live.

Here's what I've gone for. I've gambled £5 and need the following five things to happen. 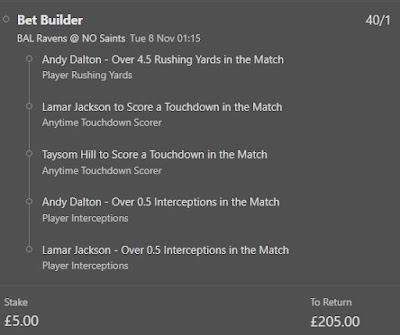 10:36AM Update
This bet didn't get anywhere. It had two winning selections with Andy Dalton rushing for over 4.5 yards and to throw over 0.5 interceptions.
Lamar Jackson could have thrown an interception, but it was called back due to a Saints penalty. Not that it would have mattered because I still would have needed touchdowns from both Jackson and Taysom Hill.
Posted by David Taylor at 12:00 AM