That one word is the first thing I typed yesterday morning.

It was written upon finding out that the Japanese wrestler - Katsuya Kitamura - had passed away.

All I could, and still, think about is how much of a prospect this guy was when I first came across him.

A few years back, Kitamura was one of the trainee wrestlers in the New Japan dojo. He was built like a monster and, at certain points (and as you'll see in the picture below) he wore a gumshield which gave the impression of vampire fangs.

I rarely ever talk to my friends about the young lions in New Japan. But, there was something about Kitamura which made me hype the guy up as if he could turn out to be the next big thing. I was Team Kitamura.

Then, however, Kitamura was gone. He had left the dojo and NJPW for good. If I recall correctly - it was not long after he was in a bike accident and suffered other issues after that.

Without question, he will be one of those 'What If?' stories in wrestling. He's certainly one in mine. 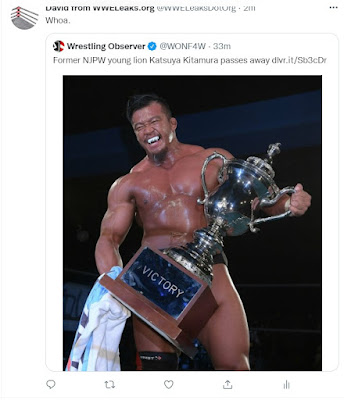