I watched the first trailer for Creed III yesterday. It's set for release in March of next year. 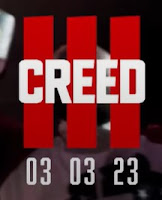 It looks like it has an interesting story. Going by what is in the 2:23 trailer, it appears as though an old friend from Adonis Creed's childhood comes back on the scene after spending eighteen years in prison. From there, it appears as though this friend eventually turns on Creed resulting in them having a showdown in the ring.

I still stand by my opinion that this film needs Sylvester Stallone in it. Even if Rocky just pops in for a moment or two.

With no Rocky Balboa, I can guarantee there will be knives out for this movie.

On the topic of Rocky - I've recently finished Ralph Macchio's autobiography. In one of the chapters, he mentioned there was a pitch made - sometime during the 1990s - for there to be a film with Daniel LaRusso and Rocky Balboa to team up.

The idea went nowhere, of course.

That scenario reminds me of another crossover which would have seen Axel Foley, from Beverly Hills Cop, team up with Mick Dundee (from Crocodile Dundee).

I don't know which combination I would have liked the most!