London Bridge Is Down

The Queen is dead.

Buckingham Palace has just announced that Queen Elizabeth II passed away at Balmoral this afternoon.

I had spent most of the day with BBC News playing in the background.

It's going to be an intriguing few days because the United Kingdom is now in a stage of mourning which, I believe, is set to last eleven days.

A few years ago, I came across a YouTube video which wrote about what would happen when our longest-reigning Monarch would eventually pass on. The 'London Bridge is Down' protocol is now in full effect. It started with Buckingham Palace revealing the news and then the BBC, and all of the other major broadcasters over here, have relayed the news. 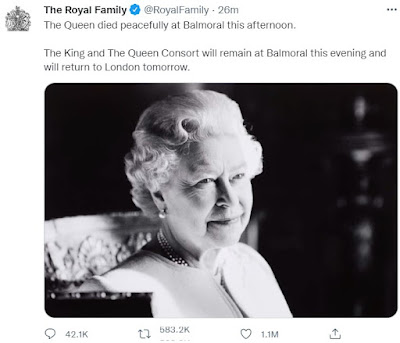 As I stated above, it's going to be a peculiar few days. We now have a new King in the former Prince of Wales - Charles. He could become King Charles or take up a new name now.

There are other things that will obviously change now. We'll have new currency with the King on it, the national anthem will now be 'God Save The King', postage stamps will bear the head of our new King and many other things will change.

Liz Truss is now outside 10 Downing Street as I am writing this post. Incredible to think that Truss has only been in power since the top of this week. She visited the Queen a couple of days ago and now has to honour her.