It was the draft in the fantasy NFL league I play in last night.

Here are my picks. 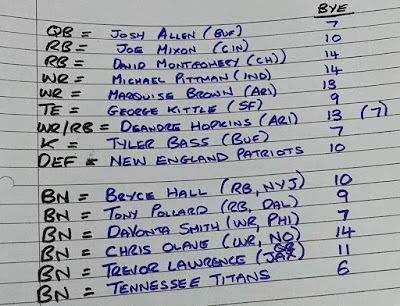 I messed up when I saw DeAndre Hopkins on the board. The Arizona Cardinals' wide receiver is set to miss the first six games of the season due to a suspension, so I can obviously only start to play him from week seven onward. I made changes to my line-up as soon as the draft concluded.
Another screw up I've just noticed is I wrote Breece Hall's name as 'Bryce Hall' after I had selected him.

Within an hour of the draft finishing up, I received the dreaded email from the NFL Fantasy website with its projections for my team.

It graded my draft a B and projects that I'll finish the season eighth in the ten-team league. It reckons my squad of players will finish with a 4-11 record.

So, as per usual, my goal is to now win one more than the projection. This year the magic number is FIVE.