When I was gifted a signed copy of Drew McIntyre's autobiography - A Chosen Destiny, I read the opening few pages and then added it to my shelf of pro wrestling books to pick back up at a later time.

With McIntyre challenging Roman Reigns for the Undisputed WWE Universal Championship, at today's Clash at the Castle show from Cardiff, I thought this week was the most appropriate to take it back down from the shelf. 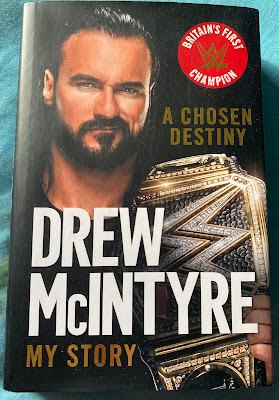 McIntyre's story is of a person who gambled on himself and won. More than once.

As a child born in the year of the first WrestleMania, Andrew McLean Galloway IV (he likes using that name whenever there is a need for it) was living in Ayr, Scotland during the initial wrestling boom period when WWF programming aired on Sky TV in the UK. By the latter part of the second boom, Galloway had made his career choice - he wanted to become a professional wrestler.

Galloway details how he travelled by train from Scotland all the way down to Portsmouth to train at the Frontier Wrestling Alliance's training. From there, the ball began to roll. We are introduced to some of the other groups he worked for across England, Scotland and Ireland.

Ultimately, Galloway signed for World Wrestling Entertainment in 2007 and was christened 'Drew McIntyre'.

McIntyre covers his introduction to life working under WWE's developmental system as well as his ascension to the main roster.

Early in McIntyre's run on the main roster, then-WWE chairman, Vince McMahon, on an episode of WWE Smackdown, lauded the Scot as a future WWE Champion. However, outside of the ring distractions kind of derailed any sort of momentum his on-screen character was bulding.

After being downgraded to a low-to-mid level comedy act, alongside Heath Slater and Jinder Mahal as 3MB (3 Man Band), McIntyre's career - as a WWE performer - was banjaxed.

If Galloway's first gamble on himself was travelling to Portsmouth from Ayr in the early 2000s then the post-WWE career punt was the one which ultimately led him to the big one in 2020.

Following his contract termination, Galloway took stock of his career and went on a three-year odyssey across the world of independent professional wrestling.

Galloway returned to the company and his 'Drew McIntyre' moniker - as part of the NXT brand - in 2017. The renaissance brought him the NXT Championship before he moved back up to the main roster.

McIntyre went on to win the 2020 Royal Rumble and was set to face Brock Lesnar for the WWE Championship inside Tampa Bay's Raymond James Stadium at WrestleMania 36.

One of those things didn't happen.

With the Coronavirus pandemic sweeping the world in the spring of 2020, WWE was forced to move WrestleMania from the 65,000-plus seater stadium to its Performance Center with a fan count of zero.

McIntyre's big moment over Lesnar was not only filmed before no audience. It was also aired on a tape delay, so the new WWE World Champion had to anxiously keep quiet about his victory until the match aired on TV.

As well as detailing Galloway's rise from wrestling fan in Ayr right up to becoming the WWE Champion, the book covers the wrestler's early upbringing as well as married life with his wife, Kaitlyn, and their cats.

I found Galloway's mother to be a strong-willed lady who didn't allow physical ailments get in the way of looking after her two boys. I felt for Galloway when he wrote the parts in which he covered her passing away from cancer. He has since memorialised his mother by having a sword named 'Angela' as part of his act.

Tonight, McIntyre will challenge Roman Reigns for the undisputed WWE Universal Championship - a combination of the title he won, and held, during the early part of the pandemic as well as the Universal Title.

Reigns is on a two-year run, so I have doubt the title will change hands in Cardiff. I've enjoyed Reigns', for want of a better word, reign but feel that McIntyre winning the straps in front of a British crowd is deserving considering his big moment of a live crowd pop was stolen before it could be realised.

Win or lose, the next chapter in McIntyre's life story will be written tonight.