In April, I wrote about trying two pizza flavours of Pringles potato snacks. I followed that up close to four months later after finding a couple of pizza flavoured Mini Cheddars. Now, there's another snack brand out there which has gone down the pizza route to complete a trilogy in 2022.
Doritos have brought out 'Loaded Pepperoni Pizza' and 'Triple Cheese Pizza' flavoured tortilla chips. I found them in my local Iceland (or rather I found them on the Iceland website and the local Iceland delivered them to me, but that's beside the point). 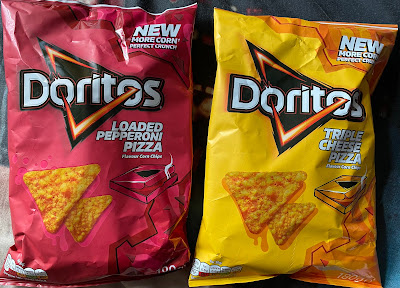 I've tasted both flavours and feel quite underwhelmed. Especially considering I've eaten Pringles and Mini Cheddars that both had what should have been similar flavours and reminded me of pizza.
The 'Loaded Pepperoni Pizza' flavour Doritos was slightly spicy. That was expected considering the 'Pepperoni' theme. It did not make me think of pizza in any way, though.
As for the 'Triple Cheese Pizza' flavour - that tasted very cheesy. I liked it the best. However, it was not reminiscent of pizza in any way. In my opinion, there's meant to be a tomatoey hint in products claiming to have a pizza flavour. 'Triple Cheese Pizza' tasted like.. well, a blend of three cheeses coated on top of a tortilla chip.
If they had simply been named  'Pepperoni' and 'Triple Cheese' flavours, that would have been fine. Adding 'Pizza', despite it obviously helping with the marketing, ultimately creates a let down when it's time for the tasting.
Posted by David Taylor at 12:00 AM