There are a couple of new Pringles flavours out there.
Sold in B&M Stores, and possibly elsewhere (I don't know!), the limited edition 'Pringles Passports' varieties have worldly themes. 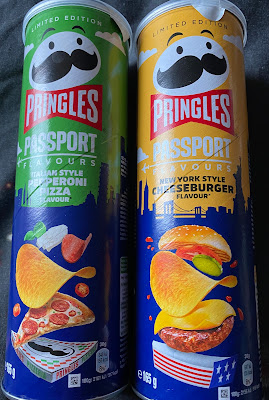 As you can see, in the picture above, the first flavour is 'Italian Style Pepperoni Pizza' and the other is 'New York Style Cheeseburger'.
I've tasted both.
It wasn't the first time I've ever had pizza flavoured Pringles. I vividly recall eating a tube of them while my sister was enduring her early stages of labour in my living room over twenty-one years ago. I also recall Asda exclusively selling a newer pizza flavour within the last ten years or so.
Those two versions of pizza Pringles are better than this new kind. I suppose the difference is mainly because it focuses on the meaty - pepperoni - part of it.
Forgetting that they're partly branded as pizza, if I had to explain these pepperoni flavoured Pringles, I would liken them to a pasta which has pepperoni in it. I guess what I mean is this: these potato snacks should have been called 'Italian Pepperoni Pasta' flavour.
I've eaten cheeseburger flavoured crisps in the past. I wrote about a Walkers brand almost two years ago.
Just like the Walkers, and those Quarterback snacks you can find from Golden Wonder, there is a hint of gherkin which gives them the - time to create a word - burgery taste.
I like the cheeseburger Pringles more than the Pizza. However, if the previous pizza flavours - mentioned above - were to ever make a comeback, I'd immediately choose them over the burgery ones.
For now, however, New York Style Cheeseburger wins this head-to-head.
Posted by David Taylor at 11:53 AM