On April 28th, I published a post after trying a couple of limited edition Pringles flavours. Coincidentally, Jacobs has introduced Mini Cheddars with similar flavours.

Seeing as it has been two years since I wrote about Mini Cheddars (on July 16 2020 and August 21 2020), I thought it was a perfect opportunity to sample the 'Classic Cheese Pizza' and 'Bangin' Cheese Burger' flavours and do a head-to-head to see which one is the best. 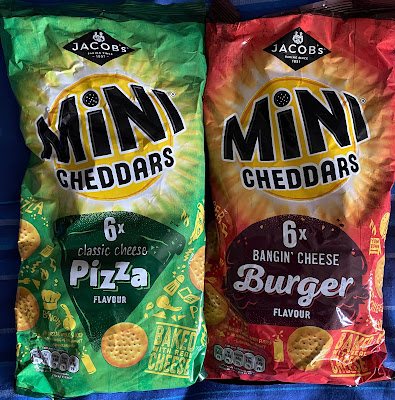 Classic Cheese Pizza Flavour
These Cheddars tasted exactly as I predicted they would. They are reminiscent of every single 'pizza' flavour product I have ever tried - a cheesy tomato taste. Or maybe my mind is playing tricks on me and all it is are Italian spices and cheese to give off the hint of a pizza.

Bangin' Cheese Burger Flavour
I'm going to taste the 'Bangin' Cheese Burger' flavour live because I have doubts whether I'll like it. The reason why is because the 'Bangin' wording has me wondering if it'll be spicy. I also anticipate a gherkin flavour that I have often associated with burger-flavoured food products (ie Pringles and those Golden Wonder Quarterback potato snacks that can be found in the cheap crisps section of corner shops on-and-off for years).

Okay, so it isn't spicy. That's a relief. As predicted, it did have the gherkin scent. However, it does taste slightly more 'meaty' than it does, for want of a better word, gherkiny.

Yes - this is a cheeseburger flavoured biscuit.

The Verdict
I'll have to be fair and call this head-to-head a draw. I didn't dislike either flavour. There were no swerves, both flavours tasted exactly as promised.