Now that all of the four major leagues in English football have concluded their respective regular seasons, I've gone back to the season handicap betting post I wrote last summer and applied each teams' finishing league points to the points bookmakers gave them ahead of their campaigns to work out which team won the season handicap markets for each league.

League 2
The team at the top of the handicap market for League 2 is Sutton United. Before the season began, the bookies gave Sutton a twenty-four point head-start. Their actual finishing position, in the real league, was eighth place missing the playoffs by one-point. Their seventy-six points, added to the twenty-four, gave them 100. 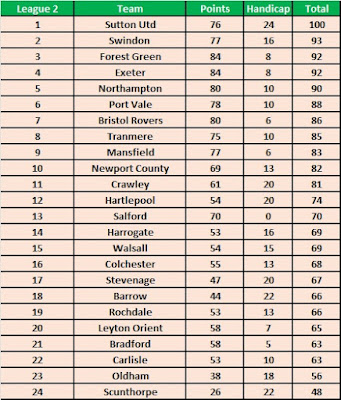 League 1
Wigan Athletic won League 1 with ninety-two points. However, they finished in third place in the season handicap market.
Ironically, the team which finished third in the actual league - Milton Keynes Dons - finished first place in the bookmakers' league.
MK Dons had ten points before a game was played. Their eighty-nine real points meant that they topped the table at 99. Just below them, on ninety-eight, was Rotherham who also finished in second-place in the real competition. 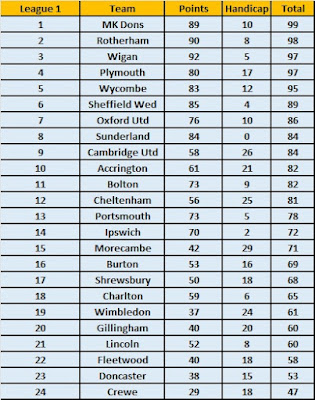 Championship
Huddersfield Town finished in third place of the Championship with a points tally of eighty-two. Add on top the twenty-eight point head-start and they closed out the handicap market at the top with 110.
The actual Championship victors, Fulham, had a zero-point advantage and finished fifth in the handicap league. 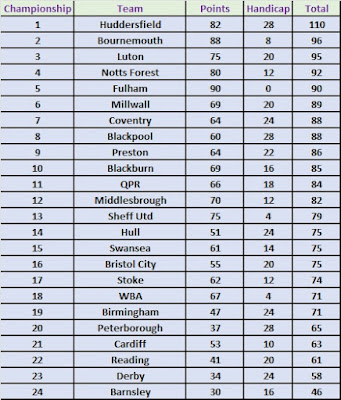 Premier League
Even though Liverpool narrowly missed out on winning the Premier League title over the weekend, the Reds won the season handicap market for the top division in English football with a score of 99 points. Going into the season, the bookmakers applied a 7-point advantage.
Manchester City, who topped the real table with ninety-three points, came in second place in the bookmakers' market. They had started off the season without a points cushion. 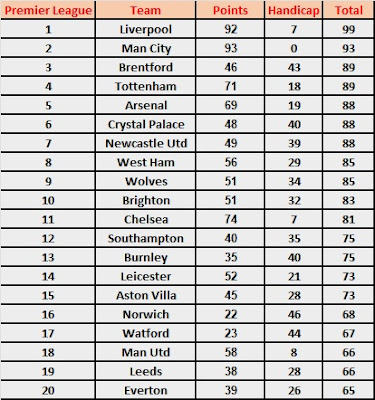 My Results
None of the bets I mentioned over the summer came in.
I took Port Vale, with a +10 advantage, to be at the top of League 2. They finished in sixth place in the bookmakers' table after closing the season in fifth in the real league.
Charlton +6 was my play for League 1. The team finished the real division in thirteenth position with fifty-nine points. In the season handicap market, they closed out in eighteenth place.
For the Championship, I took Reading +20. They finished in twenty-second place, which is one less than reality because they avoided relegation by concluding their campaign in twenty-first position with forty-one points.
Finally, I had Chelsea +7 to win the Premier League market. They finished the actual league in third place with seventy-four points but ended up in eleventh place in the handicap market.
Check back later this summer for a season handicap betting post ahead of the 2022/23 leagues.
Posted by David Taylor at 10:39 AM