I don't know for sure how long I have been doing it, but - in the days before the start of the football season - I like to have a gamble on bookmakers' 'Season Handicap Winner' markets and share my bets here on the blog. Then, once the respective leagues have concluded, I look back and see how those wagers have fared.

As per usual, I've had a punt on the handicap markets for Leagues 1, 2, The Championship and The Premier League.

If you are new to the Season Handicap Bets, I recommend reading this thread of posts. You'll understand what they are and my team picking methods.

In previous years, I've mentioned that I have used the Racing and Football Outlook season preview guides to make my picks. I have done that this year. However, I came across a slight problem which forced a slight adjustment.

The RFO has a write-up for each team in the previews. However, underneath each of these notes would be words like 'Strugglers', 'Play-Offs', 'Mid-Table' and more. I would use these predictions to rank the teams in order with 'Champions' at the top and 'Relegated' right at the bottom. I would then add the average points that teams in those positions finish on at the conclusion of the football year and then add their handicap points to that number to see which team is at the top of the list when my spreadsheet adds each teams' predicted position points with the handicap.

The roadblock I encountered was that the indicator words were no longer there in the guides. Therefore, I had to make some conclusions by the wording of the write-up. Here are two examples: 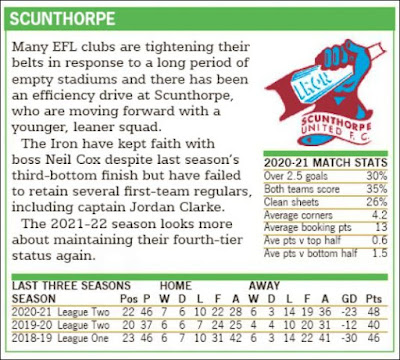 In the part for Scunthorpe, you'll see that the writer expects the team's upcoming season to look 'more about maintaining their fourth-tier status again'. Going by that, I tagged the team as potential 'Strugglers' and placed them near the bottom of League 2. 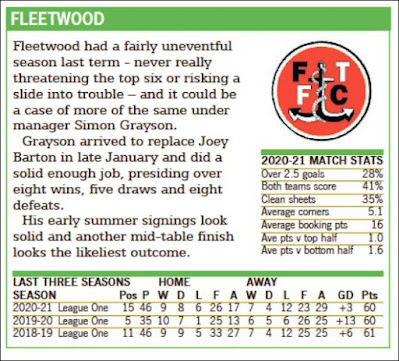 In the guide for League 1, the writer speculates that Fleetwood's latest recruits look promising and that 'another mid-table finish looks the likeliest outcome'. This easily placed the team in the middle of the table when I predicted the final table for that league.
Here's how my method has predicted the season handicap tables for the four leagues.
League 2
The RFO prediction for Port Vale's season stated that manager - Darrell Clarke - had strengthened his side and was 'eyeing a promotion push'. Those words put the team in the 'Promoted' group in my ranking.
When I finished ranking all the clubs, Port Vale was number one and - as the number one team - it was given the average position points of eighty-eight. Add on top the ten points that the bookmakers had applied and the ninety-eight points was enough to keep The Valiants at the top. 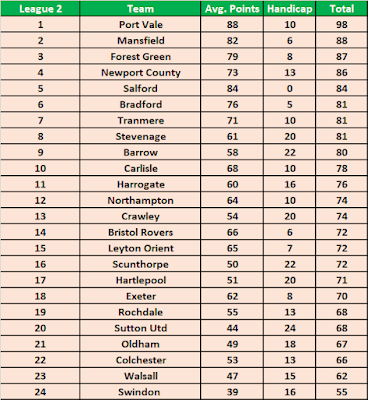 League 1
'Promotion' was the group I placed Charlton Athletic when the RFO wrote that the club 'feel that their natural level is the Championship and will be aiming to get there under Nigel Adkins'. As well as that, the write-up reminded me that Adkins has managed to get three teams promoted from League 1 in his career.
The average points for a team finishing in League 1 is 94. Charlton placing top of my ranking meant that - with the +6 from the bookies - that they have 100 in my predicted finish with both numbers added together. 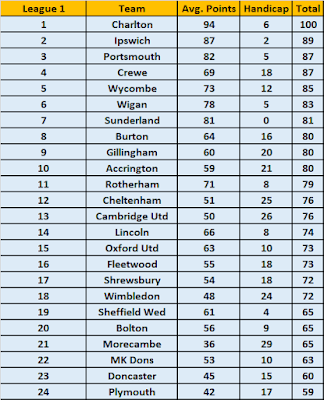 Championship
After reading the guide for the Championship's 2021-22 season, I had Fulham at the top of the league BEFORE adding each teams' handicap points. Once that was done, Reading (+20) and Luton (+20) both leapfrogged The Cottagers with the spreadsheet projecting that the latter will finish the season handicap league on 103 points. 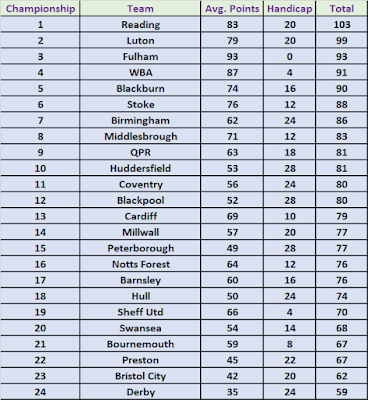 Premier League
There was a two-way a tie at the top when I completed the projected handicap table for the Premier League. Both Manchester City and Chelsea had eighty-nine points each.
Whenever there have been ties in the past, I've opted to go with the club that has the most handicap points when I have placed bets on the results. Even if I hadn't a history of taking the points, the +7 for Chelsea is what I would have gone for because I have a feeling the Blues could finish the season above Manchester City - in the actual league - as champions.
The Racing and Football Outlook's write-up for both teams appears to lean on City to successfully defend the Premier League championship in 2021/22, but it does note - when it comes to Chelsea - that the team 'could go close to the title'. 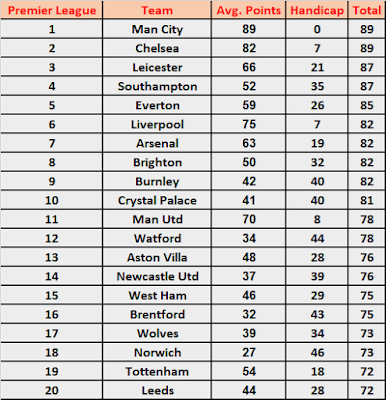 My Bets
Here are the bets I've done. As per usual, I stress that season handicap betting is something I like doing for a bit of fun to follow along during the season. I have had a few wins, but many losses over the years so please keep that in mind if you're looking to follow along.
40p e/w Lucky 15
Port Vale +10 (League 2)
Charlton +6 (League 1)
Reading +20 (Championship)
Chelsea +7 (Premier League)
I have also gambled on the teams individually in four £1 each-way singles.
Posted by David Taylor at 12:30 PM