Wentz To The Commanders

There is one thing which happened this week that I am surprised I haven't mentioned until today,
Carson Wentz is no longer an Indianapolis Colt. 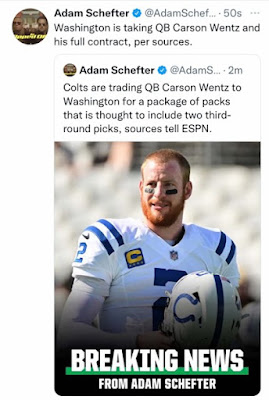 As you can see, I came across the news two minutes after it broke. I welcome it immensely.
Last year, I wrote about Wentz moving from the Philadelphia Eagles to the Colts. I pointed out that it was a trade I disliked because I am not keen on Wentz as a quarterback. I had also read, at the time, reports about him as a teammate that did not fill me with a warm fuzzy feeling.
I have to be fair where it's due. The 2021 season saw Wentz play well for the middle of it. It's the bookends which matter, though. Indianapolis failed to make the playoffs with Wentz at the helm. They needed to win either of the last two games on the schedule. And flunked.
Not. Good. Enough.
Wentz now moves to the newly-named Washington Commanders. This means he'll be up against his first NFL team - the Eagles - as they both reside in the NFC East division. I suppose I'm intrigued to see how those games fare. But, only to a certain level.
I don't know what is next for the Colts. I'm hopeful that there is a plan to bring a big name in (like Jimmy Garoppolo). It feels like a window is about to shut if something isn't done imminently.
Posted by David Taylor at 10:38 AM