The British version of Kellogg's Froot Loops (or Fruit Loops, if you want to be accurate) are rubbish when compared to what is sold in America.

The US variety is more colourful than what we have over here in the UK.

With that said, I suppose there is a reason why there is a difference in colour between the two countries' loops and it has a lot to do with children's health. Meaning that the UK edition is possibly healthier.

The reason why I am on a Fruit Loops rant today is because, for Tuesday's breakfast, I tried Unicorn Froot Loops.

They're British. I saw they were available in a corner shop, so purchased a box. 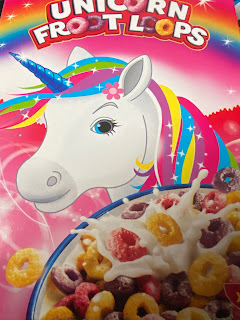 As noted, I had tasted regular British-style Froot Loops in the past. I assumed the 'Unicorn' branding meant that the bowl would have a few marshmallows alongside the loops. 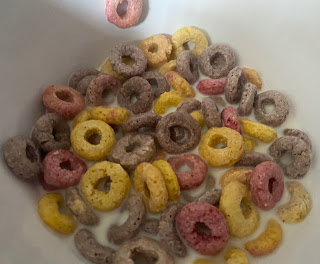 God knows why they placed a unicorn on the cover.

Head back to almost eleven years ago and you'll see a post in which I had a bowl of the proper American, fully coloured Froot Loops. That's more like it!