With it being Super Bowl Sunday tomorrow, and with it being on February 13th - and important date on this blog - I have to write about the game a day earlier than I usually would.

As noted a few weeks ago, a Los Angeles Rams versus Cincinnati Bengals game was the fixture that I wanted when it became clear which teams had made the final four. So, I am glad of that.

I am also glad that I am in the position where I am going to be happy whichever team wins the Vince Lombardi Trophy tomorrow.

I'm sitting here, at the keyboard, and I genuinely cannot decide which team I would like to win.

I've written more than once that the Rams story is going to be great because of all the work its managers had done to construct the team into a Super Bowl contender. The 2021 trade for Matthew Stafford, from the Detroit Lions, which saw the Rams' quarterback - Jared Goff - move in the other direction will be regarded as great business if the Rams win tomorrow.

There's also the other signings that were done, of course.

Also - the Rams will be playing in their home field and could see back-to-back years when the team playing in its home stadium wins the game.

As for the Bengals - I like an underdog story. Quarterback, Joe Burrow, has never lost a playoff game either at college or professional level. I love that stat and one half of me would like that to continue tomorrow.

It really has so many plots going in. I hope it turns out to be a good one.

I've placed a few bets as of the time of writing. I wrote about wagering on the half-time show earlier this week. However, here are a few of the Bet Builder punts I've gambled on. 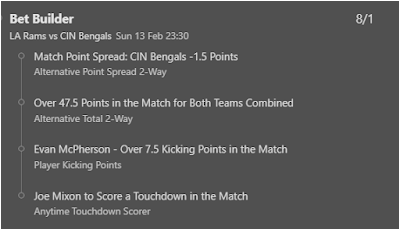 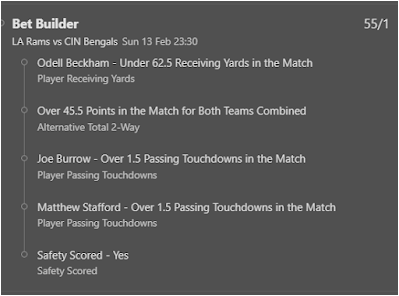 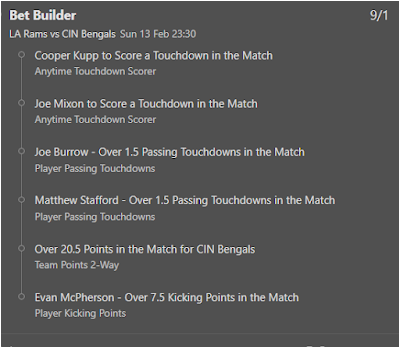 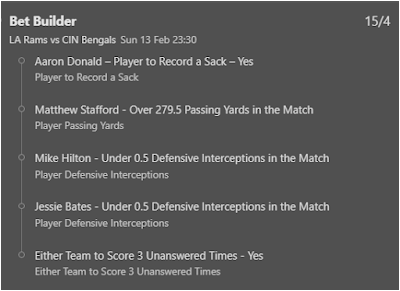 Enjoy the game. I'm sure I will. I'm not so sure I'll enjoy seeing the results of some of those bets, though.
Posted by David Taylor at 11:40 AM