I've been somewhat bored of the storylines on Neighbours recently. However, things are seemingly looking to pick up.

Over the past two episodes, here in the UK, viewers have been reintroduced to a blast from the past. 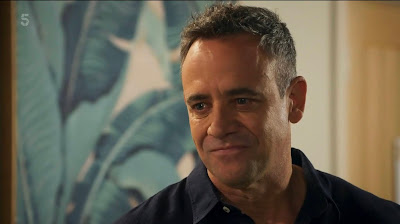 Richard Huggett - who played Glen Donnelly in the Australian soap in the early 1990's - has returned.

Donnelly's reappearance has occurred during a hotel conference that Paul Robinson, and other members of the family, are attending.

The pair have history because Donnelly is the illegitimate son of Paul's father - Jim.

The introduction of Donnelly, back in the 90's, was controversial because there was a fling between he and Jim's daughter - Lucy - before they realised how they were related. This storyline was edited out by the BBC, so only hardcore British Neighbours fans would know about it.

By the way, Lucy (Melissa Bell) has also reappeared for this current story.

What has interested me about the Donnelly return is the way he appears physically.

When we last saw the character, Donnelly was paralysed after falling from the roof of Paul's hotel - Lassiter's. I can't recall exactly how he departed, but he was 100% unable to walk and did have animosity with his brother for the accident. 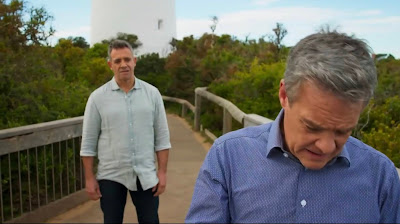 Yesterday's episode ended with a cliffhanger. Paul, who thought he had seen Glen from his hotel room in the previous episode, had asked his private investigator to find any information about Donnelly's whereabouts. When the PI delivered unsatisfying news, Paul hanged up the phone, turned around and noticed that Glen was standing behind him.

Bringing back old faces from the past is what makes Neighbours the most appealing to me. In a way, it's like what pro wrestling does by bringing back its big names in a bid to regain attention from fans who may have more of a hankering towards the past.

Speaking of pro wrestling, one of my memories of Glen Donnelly's accident back in 1991 (but likely aired over here in 1992 because of the delay between here and Australia), is that - when they filmed the hospital scenes - Glen had a copy of the WWF Magazine from June 1991 (the post-WrestleMania VII issue) on the table in his hospital room.

Yes, I remember a prop that was used, but can't recall exactly how the character was written out of the soap shortly afterwards.