On Tuesday, in the post titled 'A Bet Builder Wager On Week 4's MNF', I noted how I was contemplating a change - or abrupt end - to the weekly bet builder posts for Monday Night Football.

One of the reasons behind the decision is because I felt that I was leaving myself backed into a corner by only picking Monday Night Football games. To shake things up, slightly, I have decided to do a bet builder on a different game of the weekend - Sunday Night Football. I might even come back with a bet builder for Monday's game between the Colts and Ravens.

In a little over an hour from now, the Buffalo Bills' visit to the Kansas City Chiefs will kick off. I have selected five things that I need to happen for my bet to be a winner. Here they are: 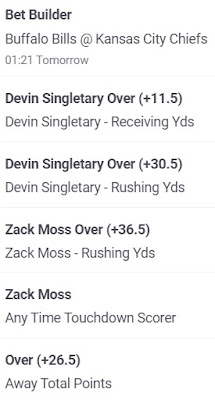 Update
Another dreadful result.
I sensed Buffalo would win the game, that's why my bet builder leant heavily on the team. Well, I got that one right because they beat Kansas City 38-20.
The winning selections were for the Bills to score over 26.5 points and for Zack Moss to rush for over 36.5 yards (he rushed for 37!).
Moss didn't score a touchdown.
Devin Singletary dropped a pass early in the game. The box score reads -2. As for rushing, he was below the required 31 yards with twenty-five.
Posted by David Taylor at 12:00 AM