Next Wednesday, the 2021 winner of the Booker Prize will be announced in a ceremony at the BBC Radio Theatre. And - as a first for yours truly - I have read every single title on the shortlist before a winner has been announced.

I came up with the idea to read every book this year because I would often come across YouTubers sharing their thoughts on the longlists/shortlists from Booker Prizes of the past. I thought it would be cool to do something similar here on the blog, but to do so from a betting perspective.

Once I knew the shortlist, I went to work on my goal to read all the books before November 2nd to allow me to publish a post on the morning of the ceremony. As you can see, considering this post is going out on October 26th, I completed my task way ahead of schedule.

The titles are in the order I read them. 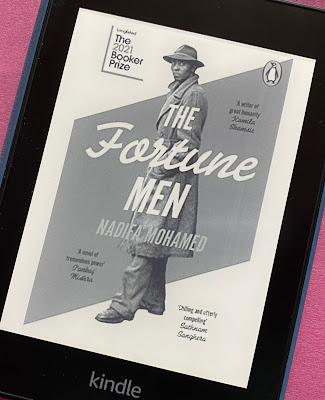 When I looked at the covers of the books in this year's shortlist, I was immediately drawn to Nadifa Mohamed's The Fortune Men.
When I read the description of the novel, I was even more intrigued by it.
Set in my home city of Cardiff, The Fortune Men is a piece of historical fiction which covers the real murder of a Jewish shopkeeper which took place in the Tiger Bay area of Cardiff in 1952.
The story focuses not only on the person who was tried - and ultimately executed - for the murder: Mahmood Mattan but also the side of the victim - Lily Volpert - and members of her family.
Volpert for sure was the victim of the crime. But so was Mattan.
In the 1990's - a review of the case and trial resulted in Mahmood Mattan's family being awarded compensation as the 1950's judgement was declared flawed. Mattan was innocent of the crime.
The Fortune Men does not portray Mattan a perfect man. Because he wasn't. He was a petty criminal who had flaws which allowed the police, and certain witnesses, to pin him for Lily Volpert's murder despite it being highly unlikely he would have been near the scene of the crime when it took place.
The flaw in Mattan's personality showed in his trial. Even though I knew how the story was going to end, I found myself exasperated at Mattan for his actions during the trial and was willing the character to turn things around to save himself.
Even though it's a bit peculiar to state that I found the book 'enjoyable' because of the content, I did find it to be a good read. It was even more enjoyable just because it is set here in Cardiff.
The Promise by Damon Galgut
Odds: 2/1 FAV 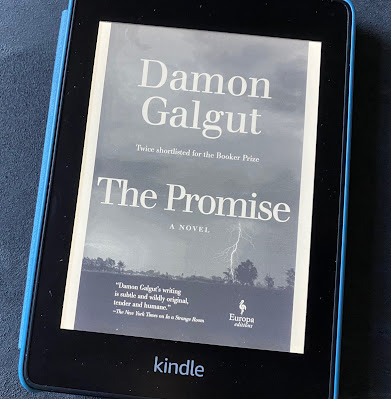 Damon Galgut's The Promise is the bookies' favourite to win this year's Booker Prize.
Even though I wouldn't have it as my own favourite of the six novels, I can understand why it is at the top of the bookmakers' list.
Set in South Africa, the story is about a promise which was made by the dying matriarch of white landowners to her black servant. The maid was to receive the house she lived in on the land owned by the white family. Other members of the family, apart from one, are not as keen to honour this assurance.
The novel starts off during the time of Apartheid and then the reader finds their way to post-Apartheid times to show how the characters, and South Africa itself, have adapted to those changes.
I liked the way the narrative was tied together. We see the relations age by the way of jumping forward to key moments in their lives (mainly during periods when they're brought together through death) but - as we're brought together at those points in time - one thing remains the unchanged - the promise is still something that has been said, but not been acted on.
Bewilderment by Richard Powers
Odds: 3/1 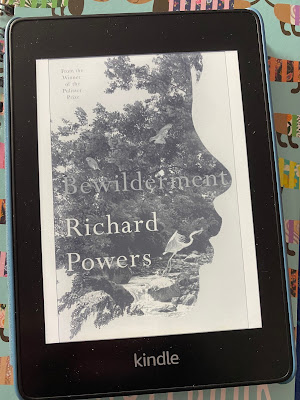 While reading Bewilderment by Richard Powers, I couldn't help but think this book could exist in a genre of its own. I can't really explain what I could call it other than 'Real Science Fiction'.
The story is about the relationship between a widower - Theo - and his autistic son, Robin. It's set in the future with Earth deteriorating due to environmental issues. One of Robin's compulsions is to try and save the world's wildlife through his art and campaigning. The latter is important to him because that is what his mother did during her lifetime. In an attempt to give his son the life he wants to live, Theo helps Robin by allowing him to campaign and also take experimental therapy to battle the syndromes he has been dealt with.
I found Bewilderment somewhat slow to start initially, but it turned out to be a charming work. I found its conclusion sad yet fulfilling.
Great Circle by Maggie Shipstead
Odds: 5/1 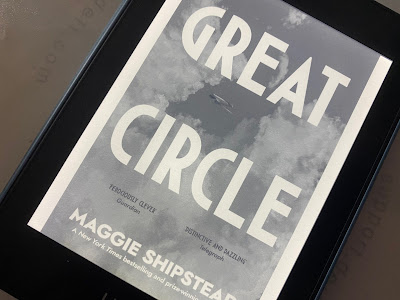 In my opinion - Great Circle by Maggie Shipstead is the best of the six novels on this year's shortlist.
There are two protagonists in the story. One is Marian Graves, a female aviator from the early age of flight who apparently goes missing in an attempt to travel from pole to pole. The other person is a 21st Century actress - Hadley Baxter - who takes on the role of Marian in a movie about the pilot and her final flight.
The novel, which mainly focuses on Graves entire life (and before it!), jumps from Graves' story (in the third person) to the modern-day, first person, account of Hadley who - to me somewhat resembled a Lindsay Lohanesque child-turned-adult star who has a bit of baggage.
After finishing the novel, I read someone state that the book was like an epic made up of a historical story (Graves) mixed with that of a Hollywood satire (Baxter) and I can absolutely agree with that summing up.
Great Circle is the densest book of the list. Apparently, its author - Maggie Shipstead - had a manuscript of one thousand pages and it was cut into 600 or so. Considering just how much depth the finished version has, I find it amazing to consider what else didn't make it.
No One Is Talking About This by Patricia Lockwood
Odds: 8/1 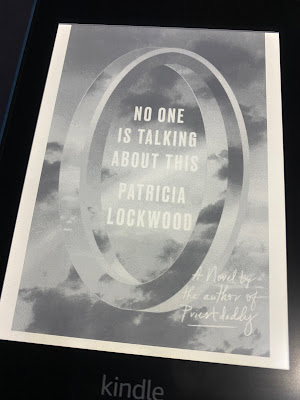 I've established that Great Circle is my favourite book on this year's shortlist. Well, I went from what I considered the best to what I believe to be the worst. And let me go so far as to state that Patricia Lockwood's pretentious No One Is Talking About This is one of the worst novels I have read in my entire life.
I dislike coming across so harsh considering the subject matter - the second part of the book is about a family's grief following the passing of a child who was born with Proteus syndrome (the same thing the Elephant Man had). Lockwood can relate to this because her sister's child died from this syndrome.
It's the first half which really turned me off the work making it a chore for me to get through (and that's saying something because it is the shortest novel on the pile!). It was written in a style of a social media site like Twitter. You'd read small paragraphs from the writer referring to things on the Internet that would only make sense to those in the know. As someone who spends more than enough time on Twitter, I got most of the now dated references. But not all. And that's a problem when it comes to how this novel could be received in the long-term. I finished the book wondering how it will take to it in the future: will it be viewed as an artful masterpiece or a clusterfuck of paragraphs? I struggle to see how it can fall in the middle. It's one or the other. I'm firmly leaning on the latter.
A Passage North by Anuk Arudpragasam
Odds: 7/1 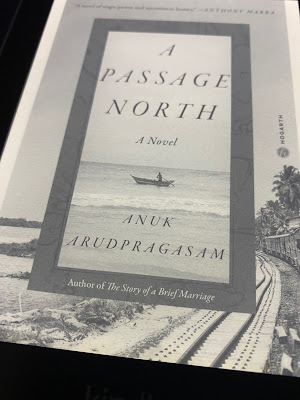 Just like with The Promise, Anuk Arudpragasam's A Passage North is a novel set in a time of change. Where The Promise uses post-Apartheid South Africa as its backdrop for the majority of its story, A Passage North is set in Sri Lanka during the fallout of from the country's Civil War which ended in 2009.
The story is about a young man named Krishan, who finds out that his grandmother's carer and friend, Rani, has died after what appears to be an accident at a well. Krishan then travels to the northern part of Sri Lanka (where the fighting took place) to attend the lady's funeral.
Along the journey, we are taken on a trip through Krishan's life encountering his observations about love, life and more.
I found the flow of the writing intriguing. It contained very long sentences and it came across to me like the reader was meant to be inside Krishan's brain as this thoughts, memories and conclusions to those thoughts and memories came through as he embarked on this odyssey of sorts.
There were times, however, when I felt that Krishan came across as a bit of a drip. Losing the character during certain points in the novel made me not like it as much as some of the other books on the shortlist.
How I Would Rank Them
If I were to place these novels in the order of my preference, I would do them this way.
1. Great Circle
2. The Fortune Men
3. Bewilderment
4. The Promise
5. A Passage North
6. No One Is Talking About This
I am firmly sticking to my first and sixth picks. The Fortune Men might be higher in my ranking due to a potential bias on my part considering it's set in my home city.
I found it tight between selecting the third and fourth places because Bewilderment and The Promise are both really good. I think what made the decision for me was the knowledge that The Promise is the betting favourite, so I went with the underdog to leapfrog it in my ranking. A Passage North is in fifth for one reason - I didn't find it as enjoyable as Bewilderment or The Promise, but ranking it slightly above No One Is Talking About This is giving A Passage North such a disservice because it is miles-upon-miles better than the sixth book. It would be a travesty if Lockwood's novel wins, but it wouldn't surprise me because - even though I abhor it - the novel does have its supporters.
My Bets
After spending all that time reading the books, I thought it would be only right to have a little flutter on my top two for a bit of added fun ahead of November 3rd.
My instinct is telling me that Bewilderment or The Promise will win, but I had to go for Great Circle (5/1) and The Fortune Men (4/1) because I enjoyed them the most.
I'll return next week with a post once we know which novel won the award.
Posted by David Taylor at 12:00 AM