It's July.
You know what that means?
Let me rephrase that.
It's July, do you know what that means to me in 2021?
Well.. I have been looking forward to this month because Talking Pictures TV is celebrating one hundred years of Laurel and Hardy by playing a plethora of the comedy duo's films and shorts starting this month.
I've just had a look at the TV guide on my cable box before writing today's post and notice that the first short is on Saturday morning during Talking Pictures TV's 'Saturday Morning Pictures' slot.
It's of a film I've had on VHS (recorded from TV) since I was at least three years old and was one of my favourites - Brats. I now own the title on DVD, but I am still planning to watch it on a proper TV to celebrate the occasion.
Each weekend, the channel will air Laurel and Hardy films and shorts from 4:00PM in a special called  'Tea Time with Laurel and Hardy'. On Saturday, The Music Box will be played followed by Pack Up Your Troubles at 4:40PM. 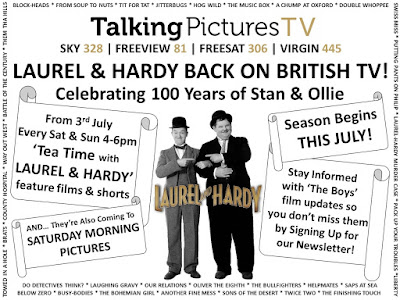 I 'stole' the above picture from a mail or tweet that was sent by the good people from Talking Pictures TV. You'll notice that, along all the edges, the films/shorts that are due to air over the coming weeks are listed.
My all-time favourite Laurel and Hardy picture - Below Zero - is on this list, so I am very happy to see it will once again air on British TV.
Below Zero was on the same VHS tape my dad had recorded Brats on when I was a child. I wrote about the film six years ago on the day it apparently reached its eighty-fifth anniversary.
You'll also find the channel numbers for Talking Pictures TV in the image.
Posted by David Taylor at 9:26 AM