Del Wilkes - better known to the professional wrestling world as The Patriot, a masked wrestler who was an American hero, passed away yesterday at the age of fifty-nine years old.

When I learnt of Wilkes' passing, a few things came to mind about his career. The main thought of all was how short his time in the profession was.

Starting his career in 1988, Wilkes had runs in the AWA, GWF, All Japan, WCW and the World Wrestling Federation.

He departed the WWF in 1998 after suffering a torn triceps and more or less retired from the industry.

After that, I rarely heard anything about Wilkes other than he was alleged to have sold The Patriot gimmick to somebody else (I believe it was to Tom Brandi, but I am not 100%) and there was a dispute over it (another one I am not 100% on, but I know there was some controversy over who owned the right to the gimmick).

With all that said, a ten-year career is not long when you consider the average pro wrestler's longevity.

As for my knowledge of The Patriot - I would have first read about him during his run in Global. I first watched him wrestle on TV when he arrived in World Championship Wrestling as a teammate of Marcus Alexander Bagwell as the team of Stars and Stripes. 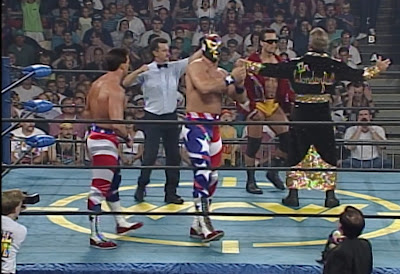 He joined the World Wrestling Federation at possibly the most opportune time - 1997.
This was during the period when Bret 'Hitman' Hart had turned heel and was playing a pro-Canadian/ anti-American character alongside a stable of his family members - The Hart Foundation. It was such a glorious angle that played the USA against Canada, and vice-versa, that I still look back on and believe it is possibly the best feud in WWF/E history.
With Wilkes being the American hero, he fit perfectly for a short-term feud against Bret and The Hart Foundation.
After that brief spell, he departed the WWF and - like I've already noted - his active career was done after that.
Posted by David Taylor at 10:36 AM