One of the most popular film directors of my lifetime - Richard Donner - has recently passed away. I want to write a little bit about Donner and how his fingerprints can be found on some of the things I've enjoyed in my time on this earth.

As someone who was born in the late 1970's, I was first introduced to Donner's work as a child when I watched Superman: The Movie.

Even though the Superman movie was something I would watch countless times in my early years, I have to admit that it isn't my favourite Donner flick.

Superman II (there's a long story about Donner and this movie!), the Lethal Weapon movie series and The Omen are all films of Donner that springs to mind when you consider his contribution to film. However, there is only one that has a place right at the peak of this list.

Some of Donner's work outside of movies also links to a couple other favourite things of mine: pro wrestling and The Twilight Zone.

You know that Cyndi Lauper did the theme tune to The Goonies, right? Well - Donner directed the music video to The Goonies R Good Enough.

The video featured Lauper with a bunch of WWF celebrities from the Rock N Wrestling era of pro wrestling. 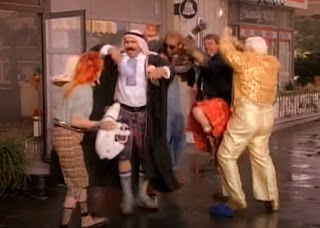 The Twilight Zone link is because Donner directed a few of the episodes of the original series. The main episode being one of the most popular stories - Nightmare at 20,000 Feet - which first aired in 1963. It's such a popular episode in the series' history that it has been remade a couple of times since albeit without Donner's direction.