World Wrestling Entertainment has confirmed that this year's SummerSlam will indeed take place from Las Vegas on Saturday August 21st.

The press release had something which was inaccurate. Here's the opening paragraph: 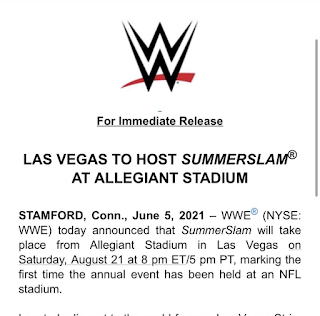 The release claims that this will be the 'first time the annual event has been held at an NFL stadium'.

Wembley Stadium, which hosted the 1992 event, has had NFL games played on a yearly basis since 2007. The venue will resume International Series games in 2022.

As a preemptive strike. because I expect this argument will be made - some might even go so far as to counter that the Wembley Stadium - which hosted 1992's SummerSlam - has been renovated since then and was not an NFL stadium in '92.

To those, I point out that the London Monarchs - a team which played in the NFL's European league - played their home games at Wembley Stadium back in the 1990's and even did so in the year SummerSlam 1992 took place.

Allegiant Stadium is clearly not the first NFL stadium to host a SummerSlam, but there will be news coverage that will use the information given in the press release and history will be rewritten before our very eyes.