Netflix has started to tease the upcoming season of Cobra Kai - the television spin-off from the Karate Kid movies of the 1980's (okay, and 1994 if we're going to include The Next Karate Kid).
The streaming giant has released a trailer of a shadowy figure with the voiceover of the Terry Silver character, who appeared in Karate Kid III. The tagline of 'Now The Real Pain Begins' then appears on the screen before the logo for Cobra Kai season four pops up.
The figure in the twenty-two second promo is obviously the baddie from the third movie in the franchise.
Silver's return was set up during season three which had scenes set in the past showing how younger versions of John Kreese and Terry Silver formed their bond while serving in the Vietnam War.
Even though the character of Terry Silver appeared in those backstory scenes, he was obviously portrayed by a younger actor.
Thomas Ian Griffith, who starred as Silver in the 1989 movie, will be reprising his role for the modern-day part of the Cobra Kai storyline.
I am fully on board with the idea of Terry Silver coming back.
Even though it has been critically panned, I liked the story of Daniel LaRusso being mentored, and ultimately double-crossed, by the evil sensei in Karate Kid III.
It'll be interesting to see if Daniel's other antagonist in Karate Kid III - Mike Barnes - will also show up. 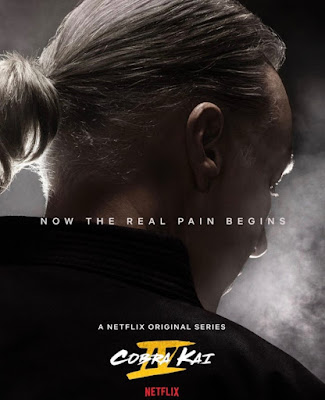 No official release date for season four of Cobra Kai has been announced as of the time of writing.
Posted by David Taylor at 12:12 PM