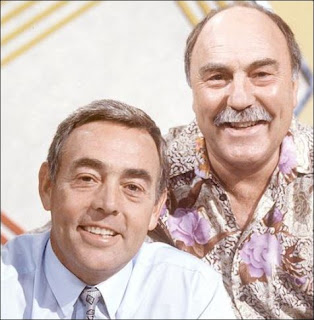 I didn't find out until after writing yesterday's post that Liverpool legend - Ian St John - had passed away.

As a lad, who grow up in the middle of a Welsh rugby family, I didn't really get to see - or even play - much football as a child.

My introduction to the sport started off in similar ways to how pro wrestling entered my life - through television at my aunt's flat on a Saturday afternoon when she would look after my sister and I while my mum was at work and dad was playing rugby or working himself.

I'd have Saint and Greavsie on the telly on those days. The programme would be on before the wrestling and other shows I loved to watch at my aunt's place like The A-Team, Airwolf and more.

Watching Saint and Greavsie is no doubt what got me interested in football. That and the collecting of the 1986 Mexico World Cup sticker book I wrote about last year.

Actually - I can recall owning a Saint and Greavsie sticker book in the early 1990's.

I was too young to know Ian St. John from his playing days, so my memories of him are unfortunately from his broadcast career.