Christmas Tree Decorations As A Child

I've been thinking about decorations we had on our family Christmas trees when I was a child and have found myself wishing I still had them.
The two main decorations that I can remember were two plastic Santa Claus figures. Both were kind of shaped the same way. However, one of their outfits was made of green glitter while the other one was gold glitter.
They were on our tree annually. I'd guess they were on my parents' trees before I came along. They were with us for many Christmases. I'd go so far as to say that they stopped being placed on our trees sometime during the late 1990's.
Or possibly a little into the new Millennium.
There was something special seeing those two small figures in the bag each year when we were placing the decorations on our trees. Equally, it was sad to see them packed away each January when the festivities were over.
I really wish I still had them.
Whilst in the middle of writing this post, I performed a search for 'Green Glitter Santas' - or something along those lines - on Google Images to see if there happened to be a picture I could use an example. I came across something that very loosely reminded me of the decorations.
Here's a picture of two Santas. One has the gold glitter colour of one of the figures. They look slightly smaller than my memory, the faces and the shape are also different. However, they are the closest thing to the decorations I had. 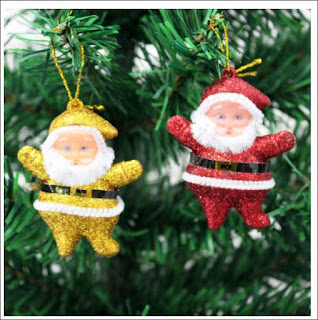 To add to how unprepared I was before writing this post, I have now done something I didn't even think about before I started to write: I've decided to purchase a set of glitter Santas that I found for sale on eBay.
They're coming in from China, so I expect they'll arrive sometime in early 2021. Expect a follow up to this post in 2021.
Posted by David Taylor at 12:00 AM