For those unaware - the new promotion sees Walkers team up with popular restaurants from the British high street to bring flavours that represent the respective eatery.

The flavours were ranked in order with Cheeseburger going number one and the Pizza Express American Hot in third place.

I thought he series ended there as I had no interest in trying the Nando's Peri Peri Chicken and Las Iguanas Chilli Con Carne versions. The only one that I showed an interest in sampling was another Pizza Express edition - Margherita, but I couldn't find them anywhere. 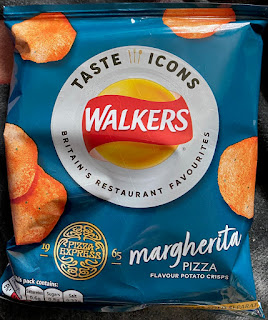 After trying them, I have to say that they were better - and obviously not as spicy - as the American Hot Pizza flavour I ate at the start of this series.
I've tried numerous pizza flavours from Walkers in the past. If I recall correctly, there was one pizza flavour that came out in the early 1990's that was very nice. It was discontinued somewhere along the way.
The Pizza Express Margherita flavour Walkers is not as good as the one I recall from the 90's. That isn't to say that I disliked it.
It also isn't as good as the GBK Cheeseburger flavour, so - in the new rankings - it will be placed in second.
1. Gourmet Burger Kitchen Cheeseburger
2. Pizza Express Margherita Pizza
3. Yo! Katsu Curry
4. Pizza Express American Hot
Posted by David Taylor at 12:00 AM