I found the following Kriss Kross puzzle in the back of one of the TV guides we have laying around our home, so I thought I would have a go 'live' in today's post because it has a Neighbours theme to it. 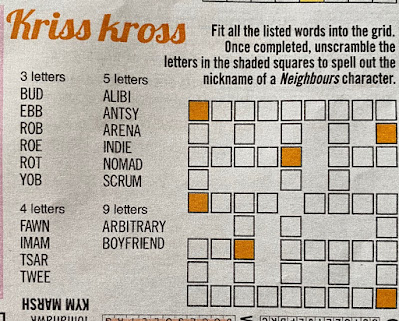 The only reason why I've classified it as Neighbours themed is because the shaded squares in the puzzle make up the name - or rather, nickname - of a Neighbours character.
My guess is the letters will be T,O,A,D,I.E to spell the nickname of Toadfish, which is a nickname in itself as the character's real name is Jarrod Rebecchi.
I'm going to time myself and see how I do.
Here I go... 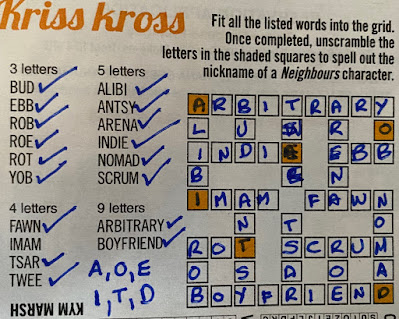 Well - I was right. The letters did indeed work out to spell 'Toadie'. Not really difficult considering he's the only character in the programme with a nickname.
As far as the time it took me to complete the puzzle - well, that was 4:40:14.
It would have been a few seconds shorter. I messed up by putting 'Tsar' where 'Twee' was meant to be.
Posted by David Taylor at 12:00 AM