The team, which finished ninth in the proper Premier League table, was given a fifty-two point head-start by the bookmakers before the season. The team managed to pick up fifty-four points over the course of the season so closed with 106 in the table.

League winners, Liverpool, who started off with four points by the oddsmakers, came in joint-second with 103 points. The other team in second, Burnley, accrued fifty-four points in proper play with forty-nine points added on top. 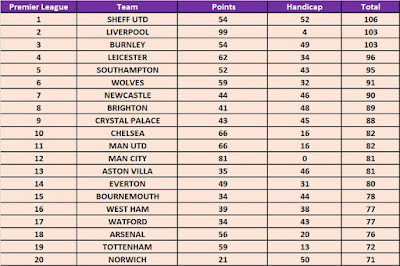 In July, I wrote about placing bets on not only the Premier League, but also the three other leagues below. My pick for the Premier League season handicap was Crystal Palace. I was far off!
Posted by David Taylor at 12:00 AM