How The 2019/20 Season Handicap Table Finished For The Championship

Leeds United did well enough in the Championship in 2019/20 to not only win the league, but to also win the season handicap table.

Before the season began, bookies applied handicaps to all the teams in the league. The eventual winners were favourites to win the league and were given zero points by the betting firms.

Once the season was finally completed on Wednesday evening, I added all of the points to the teams' final points and placed them in order.

The next best team was Millwall who started the campaign with a twenty-three point headstart. The Lions had sixty-eight real points and, with the head-start applied, they closed with ninety-one in the bookies' table.

West Brom started off with seven points and closed out with ninety after securing eighty-three actual points. 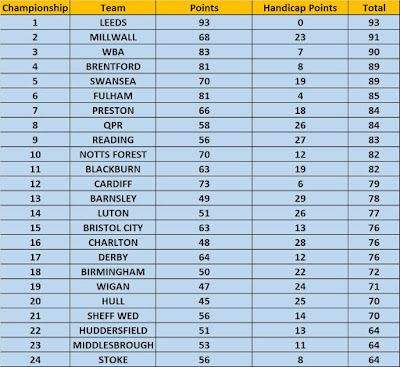 On July 31st of last year, I wrote about my season handicap bets for 2019/20. My pick to win the Championship's handicap table was Preston because my spreadsheet had the team topping its projected table with 101 points (18 points handicap and 83 estimated regular points).

As you can see, Preston finished seventh, so my spreadsheet was - once again - rubbish!

The season handicap wagers for League 1 and League 2 were Portsmouth and Newport County respectively. However, with both divisions not completing their seasons, my bets were voided.

I'll write about the Premier League season handicap table sometime next week as the season will conclude on Sunday.
Posted by David Taylor at 12:00 AM