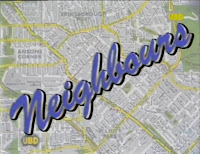 The Australian soap opera - Neighbours - will celebrate its thirty-fifth anniversary this week.

The programme, which first aired on Aussie TVs on March 18th 1985, is set to hold a week of extra episodes and is promising five weddings and three deaths.

I first started watching the show when it first came out over here in the UK. I'd have to call it the glory days of the series as almost EVERYBODY I knew watched it.

Nowadays, I hardly know anyone who still tunes in.

Me? Well - I guess I am in the section of viewers that started to tune out back in the late 1990s to early 2000s. Only, I've kind of returned within the last few years and the main reason is because of Home and Away.

The reason why Home and Away has helped with Neighbours is because they're both on the same channel over here in the UK nowadays. I would turn the TV on during the evenings waiting for Home and Away and Neighbours would just be finishing. Eventually, some things might have gripped me and I'd make sure I caught the next episode.

And so I was back on board the Neighbours train.

What I have enjoyed about Neighbours the most since I've started watching again is the tendency to bring back former characters for brief stints.

Nostalgia is a big part of this week's celebration as well because there are returns planned for the next few days. One of which is Des Clarke, who was one of my early faves. He had returned a few years ago (maybe for the 30th anniversary), but will be back over the coming days.
Posted by David Taylor at 9:23 AM