The above quote was written at the close of a post published on March 17th of this year. In it, I wrote that I found out that Coca-Cola had released a new flavour cola drink over in the USA - Orange Vanilla.

I wrote about Vanilla Coke being one of my favourite versions of the drink and was keen to try the new flavour. However, I was unsure whether I would find a can - or bottle! - over here in the UK. 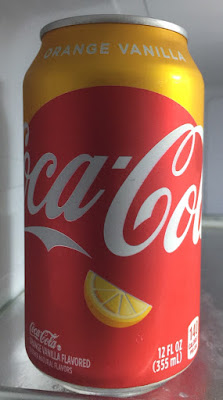 I am about to pop open the can now. I'll return in the next paragraph with my initial opinion. Before I do, I'd like to state that - when I first tried a Vanilla Coke back in 2003 - I was not keen at all. I have a feeling the same thing could happen here...

Okay, so after finishing off the entire can, I have to stick with my initial opinion. It's a 'Hmm' as I don't really know what to make of it.

I don't feel like I've tasted any cola, orange or vanilla here. It's weird. Maybe the clash of flavours was too much.

At least I can now say I've finally tried it.
Posted by David Taylor at 12:00 AM