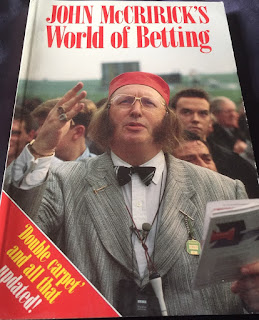 He was seventy-eight years old.

McCririck SHOULD be best known for his proper career - that of a journalist and racing guru. He worked on Channel 4's team for many, many years.

What baffles me, however, is that - when I saw the news flooding in about his death yesterday - a lot of the tabloid and news sites had McCririck as a 'Celebrity Big Brother Star' ahead of 'Racing Pundit'.

It sure made me roll my eyes when I came across that.

Yes, he made a side career out of reality TV appearances, but let's put what he's best known for ahead of that nonsense.
Posted by David Taylor at 9:01 AM