Beginning Of The End For MAD? 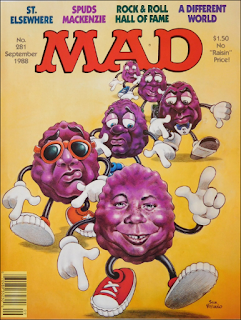 I read - in yesterday's news - that MAD Magazine will cease producing new content later this year.

The US's satirical mag has been around since 1952 and, from later this year, will no longer be sold in regular news agents in the country. Apparently, issues will still be available to subscribers and comic shops but the publications will be filled with archive material.

That, to me, looks like the beginning of the end.

Such a shame. This is another casualty of the digital age killing off a legendary print product.

I bought my first issue of MAD in the late 1980's. In fact, a quick hunt online for the 'California Raisins MAD Magazine Cover' points to it being the September 1988 issue.

I bought many others over the years, but I'll be honest - it was only within the last five or six years that I began to buy them again. I thought they had stopped importing them to the UK and stumbled back across them, like I said, within the last few years.

The magazine had a reboot last year. 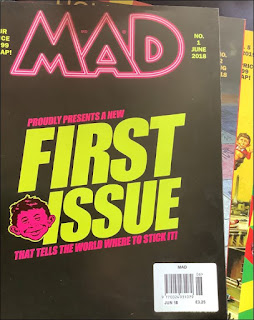 As you can see in the image above, they revamped the MAD logo and started everything back to 'Issue One'.

This should have been a sign of where things were seemingly going. One last gamble.

Will I miss it? Of course. However, I just hope that the magazine continues in whichever form it can.

Oh, and I hope that it'll still be distributed over here in the UK. Otherwise, there'll be no way I can continue being a reader...
Posted by David Taylor at 10:21 AM