What a crazy finish it was to last night's Wild Card playoff game between the Philadelphia Eagles and the Chicago Bears.

In the latter part of the game, and with a little over a minute left on the clock, the Eagles scored a touchdown to go ahead 16-15. The Bears were able to move the ball down the field with mere seconds left in the game.

The team went to kick a field goal to send the home team through to the next round, but Philadelphia's head coach - Doug Pederson - called a timeout just as the Bears' kicker, Cody Parkey, made his move.

It would have been a successful kick had he not been iced by the timeout.

Then - following the short breather - Parkey made his kick. This time, however, the ball did not sail through the posts. It struck one post, then fell onto the crossbar and fell back onto the field. 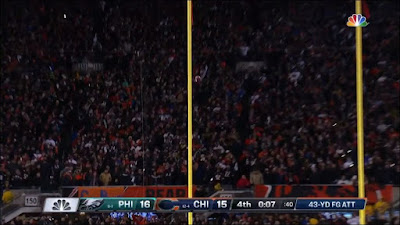 Had the ball moved in the opposite direction, Chicago would have exited the field as victors. Instead, they departed as gawping losers surprised at what they had just witnessed.

Shortly after the shocking conclusion to the fixture, NBC aired clips from the season where Parkey failed to score field goals. The ball struck the posts in the short montage.

After watching the clips, I was surprised the Bears hadn't parted company with Parkey before last night. I'm not saying the team should have and I applaud the management for sticking by their guy. However, I've seen many kickers cut ruthlessly for errors like that.

Hard to call the miss a surprise when looking at the evidence before me. Crazy, yes. But, surprising?
Posted by David Taylor at 4:33 PM