No TNF, But The Colts Are 'In The Hunt'

Ever since September, the Thursday posts have been about testing my NFL spreadsheet by predicting the pointspread and totals picks for the Thursday Night Football game. With there being no more Thursday games on the 2018/19 schedule, the series has obviously ended.

There are two weeks left. The Colts are still 'In The Hunt' going by the playoff scenario below. It looks like they need Baltimore or Pittsburgh to stumble somewhere along the way. 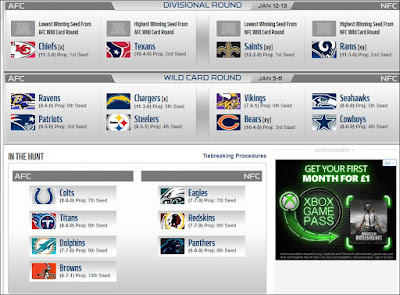 They also need to ensure victory in the next two games to be in with any chance of making the post-season.

^ The above sentence was meant to read 'My fingers are crossed'.
Posted by David Taylor at 7:04 PM