Watching What's My Line Brings Back A Childhood Memory

I watched a clip from the American version of This Is Your Life on YouTube recently. Ever since then, I've found that the website has recommended a lot of classic American TV shows for me to view. One of which popped up on Wednesday. It was an edition of What's My Line - the panel show where the competitors have to guess the profession of a person who has been brought from backstage and onto the table in front of them.

The panelists' job was to guess the occupation of the guest by asking a series of 'Yes' or 'No' questions. Celebrities at the time, like Walt Disney, also made appearances. Whenever this happened, the panelists had to wear blindfolds in order to not ruin the game.

One person from way back then didn't need to have the panelists blindfolded. If this were to happen today, I am sure he would be. 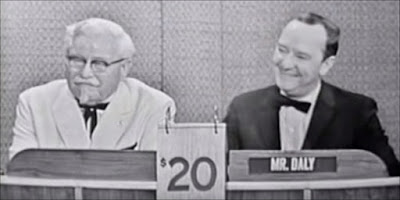 Yes, that is - or rather was - Colonel Harland Sanders, the man who built the Kentucky Fried Chicken empire.

It was the first time I had ever seen the man other than on KFC marketing. I was quite surprised that none of the panelists knew who he was when he first appeared on the show. Like I wrote earlier, this wouldn't happen today. He would be instantly recognizable.

I showed the clip to my father. He went on to tell me about how he watched the British version of the show back around that time.

It led me to ask 'Do you remember the edition from my era?' because it brought back a fond memory.

In September of 1986 (it could be 1987, but I'm 95% sure it was '86!), my family and I were waiting on a taxi to take us to the bus station to get a coach to the airport (Gatwick or Heathrow, I cannot remember this detail!) and - while we were waiting - we watched the British edition of What's My Line.

On the edition we watched, one of the guests was a female coach driver. Back in my day, the guests would come on and do motions. Give Us A Clue was a popular panelist game show around this time as well and so they had the guests do a charade bit. I cannot recount which airport we flew from, but I can vividly recall the lady rolling her hands in the air to represent how she would change the destination sign above her that would display on the front of the bus.

Shortly after watching the episode, the taxi arrived. We found our way onto our coach and arrived at the airport later that day. As my parents and aunt were taking our luggage off our coach, I looked over at the coach behind us and saw the lady I had seen on TV earlier that morning helping her passengers with their luggage.

I pointed her out to my father and he walked up to the lady to tell her we had seen her on TV earlier that day.

The crazy coincidence has remained with me ever since.
Posted by David Taylor at 3:09 PM