A Glass From The Past

When I wake up in the early hours of the morning, I often find myself opening up the TuneIn app on my phone to listen to a 24/7 stream of recordings from Jean Shepherd's WOR radio shows to doze back off to. 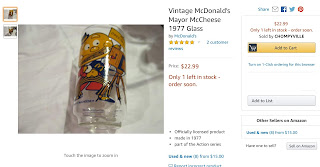 For those not aware of Shepherd, he was a popular writer, radio host and raconteur. He's most famous for the movie A Christmas Story which came out in the early-1980's and has become a cult classic.

Anyway, to get back on track, while listening to one of the radio shows the other morning - I heard Shepherd mention McDonald's. He told his listeners to buy a Mayor McCheese glass from the fast food restaurant because he jokingly suggested that in years from that moment in time, the glass would allow the listeners to enjoy an early retirement.

The episode must have been recorded sometime in the 1970's because I was able to find a glass from 1977 on Amazon shortly after I heard Shepherd's order to his hordes of listeners.

Unfortunately for those who may have followed Shepherd's instruction, I doubt they're enjoying an early retirement now. Well - not off the back of a McDonald's Mayor McCheese glass.

In 2018, a glass bearing the franchise's fictional mayor - who I had no idea existed until hearing the show - will cost $22.99.

Still - I'd call that profitable. I'm sure they were originally one dollar or something...
Posted by David Taylor at 1:20 PM