The Premier League season finished off yesterday. This means that I can finally share the closing season handicap tables not only for the Premiership, but also the leagues that concluded their regular seasons last weekend.

Manchester City not only won the actual league. The team's 100 point finish also saw them win the handicap tables with a zero-point head start against all of the other teams in the division. 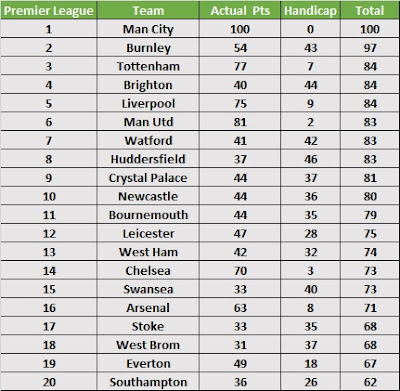 Burnley, who kicked off the year with a forty-two point head-start, came in second with ninety-seven points.

In the rest of this post, I'll show you the winning teams from the other leagues and take a look back at a bet I placed - and wrote about - in August.

The team was handed an 18-point head-start before the season began. Their actual points of 93 means that the total closed at 111. 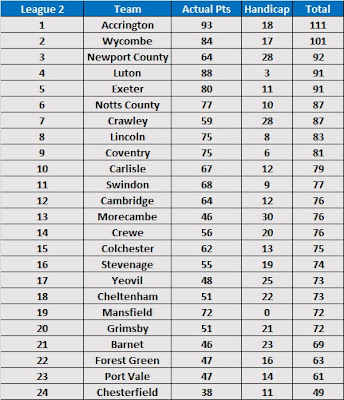 League 1
Shrewsbury Town's eighty-seven points, added to the twenty-eight the bookies gave them at the start of the season, saw them top the League 1 table with 115 points. 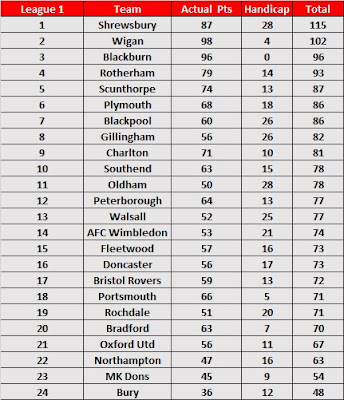 Championship
There was a dead-heat at the top of the season handicap table for the Championship.

Cardiff City and Wolves both had 106 points. City started off with sixteen additional points and added ninety on top. Wolves, who won the real league with ninety-nine points, had seven points before a whistle was blown. 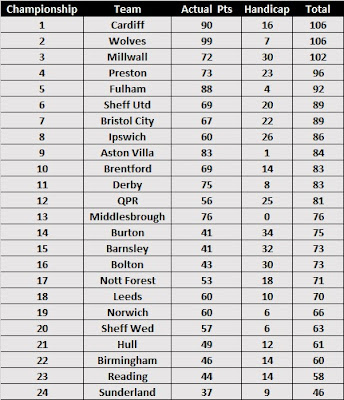 My Bets
On August 2nd, I published an annual post where I shared the teams I backed using a method that I've been using for fun.
I have never really done well with this approach hence the preface, every year, that I only do this kind of betting for fun in order to have something to follow during the season.
Well, this year has been the best in all the years I have done this.
I placed an each-way Lucky 15 on four teams and came out with one winner, one place and two losing teams.
The teams that lost were Stoke +35 in the Premier League table and Sheffield Wednesday +6 in the Championship. The team which finished second was Wigan +4 in League 1. This obviously leaves Accrington Stanley's eighteen-point head-start in the table for League 2 as the winner.

I now have a few months before I start to work on next season's spreadsheet. Expect the post in late-July or early-August.
Posted by David Taylor at 12:00 AM