It was as if I got what I was asking for on Sunday evening when I sat myself at the laptop ready to watch the San Francisco 49ers versus Indianapolis Colts game on NFL GamePass. I tuned in a couple of minutes before the start and saw a bit of the pre-game booth talk and then.

The GamePass service ended up down for the entire first half of the game. Judging by Twitter, I wasn't the only one.

Was I surprised? Not really. I wrote the following in Sunday's post:

If GamePass is going to play nice and allow me to watch a full game, the only game I am interested in watching this evening is the San Francisco 49ers' visit to Indianapolis

I was being ironic when I wrote about the service playing nice. I didn't think I would lose service at that point in the evening. Whenever I've had issues, it has always been later on a Sunday evening not dead on 6pm when the first games are about to commence. As I've written before - GamePass is not what it used to be anymore. It is no longer reliable.

Following the outage, the NFL UK and GamePass Europe announced that they would make a statement by 5pm Tuesday in regard to refunds. I had been chasing a refund for over two weeks and, despite one email telling me that my request has been passed on as a priority and not to order a chargeback from my bank, I haven't heard anything else. I have since requested PayPal get involved but nothing seems to be happening there either so I have no option but to continue trying to watch the games in case they end up declining the refund.

If I knew a refund was coming my way, I would gladly not watch - or rather try to watch - anything in the interim.

The aforementioned statement wasn't published until after the 5pm deadline yesterday. It stated that - following Sunday's problems - every customer would receive 20% discount from their subscription within the next thirty days. I don't even know what will become of my situation because everything should be in the hands of PayPal now. With that said, and considering I've had false promises from my dealings with them (telling me to wait for the refund and not getting back to me plus informing us they'd deliver a statement by 5pm on Tuesday and not meeting this deadline) and the employee written app reviews that the BBC and Independent newspaper called them out on and they eventually owned up to, there's a lot of distrust on my end. I will only believe the customers are refunded if the thirty days has passed and everyone has had their monies.

Another thing that irked me about the statement was they claimed that the refunds were being issued because of the problems that affected Sunday's games. This was the fifth week of the season and I had issues for every single week. Here's what I experienced the other weeks of the season. .

Week 1 - I kept getting locked out of games saying I wasn't in the right region. This mainly happened in the latter part of the 6pm games but happened throughout the later games. I ended up giving up and going to bed to watch the Sky Sports game on the iPad
Week 2 - Just like with week one, I took another early night after the late games were stopping and starting and settled for the Sky Sports game
Week 3 - The late games would kept freezing again. I ended up watching RedZone on my TV that's hooked up to Sky and the live Sky game on my iPad.
Week 4 - I once again had issues playing the games on the laptop so decided to watch the Carolina versus New England game on my iPad (this restricted me because I usually like watching more than one game with a split screen and this isn't available on the iPad). To be fair, this game did not have any problems but. like I said, I wasn't able to enjoy the game how I used to.

The above is just what has happened to me. Many have had worse experiences that me. For example, some have been billed in foreign currency and had to take conversion fees on the chin. Some have even been charged multiple times and are chasing their refunds to a customer support team that isn't being supportive. I could go on, but it's all out there on Twitter and the NFL UK forum. People need help, but the support is lacking. 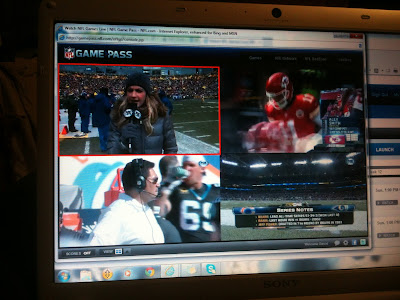 The image above is how I used to enjoy watching the service. This was taken in November of 2013 when I was recommending the service to my friends.

I cannot recommend it anymore. Especially it its current state. This season has been ruined so far.