Today is the fortieth anniversary of what some regard as the first mixed martial arts match.

It was contested between Muhammad Ali and the Japanese professional wrestler, Antonio Inoki, in Tokyo. 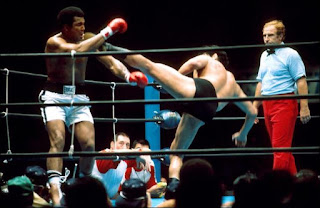 It is claimed that the fight was originally meant to be a work. However, in the days and hours leading up to the fight, Ali and his crew figured that Inoki was training too hard for it and realised he was in a shoot fight.

It turned into quite a controversial deal at the time. Inoki spent most of the bout laying on the ground while Al was standing. Inoki, in his defensive approach, would kick Ali's legs. To be fair, he was never going to win by standing, so this - in hindsight - was the way to go.

The fight dragged on for the entire fifteen rounds and ended a draw. It had been reported that the spectators were unhappy with what they saw and sounded their displeasure by screaming for a refund.

If you haven't seen the fight, there are clips of it all over YouTube. Even though it has it's historical ties to pro wrestling, boxing and mixed martial arts, it does not make for great viewing if you're looking to watch the entire thing.

Josh Gross has written a book all about it. Ali .vs. Inoki: The Forgotten Fight That Launched Mixed Martial Arts and Launched Sports Entertainment was published a few weeks ago. It's due to be released over here in the UK on July 7th (Kindle version is already available in UK). I've pre-ordered it, so will write more once I've read it.


Order From Amazon UK
Posted by David Taylor at 9:00 AM